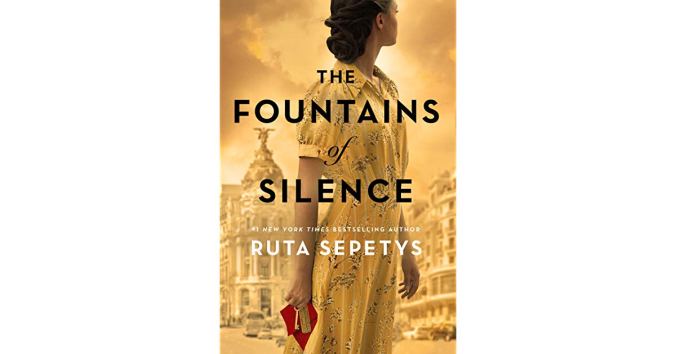 With “The Fountains of Silence,” Ruta Sepetys gives us another emotionally-charged, historically accurate, fascinating historical fiction novel. While her books are ostensibly aimed at young adults, adults love her novels, too. “The Fountains of Silence” continues that tradition and will educate and horrify readers with the uncovering of what life was like during Franco-era Spain.

The main character, Daniel Matheson, is the son of a wealthy Texas oil tycoon and his Spanish wife. He travels with them to Madrid hoping to add to his photography portfolio to win a prestigious competition so he can attend J-school in Missouri. His father wants him to study engineering at Texas A&M and work in the family business.

Daniel’s photography becomes a tool that Sepetys uses to open readers’ eyes, as well as the fictional Daniel’s, to the suffering and horrors of what happened to those who opposed Franco and how those families were treated after the end of the Guerra Civil.

But when Daniel arrives in Madrid, he’s excited to experience his mother’s culture. Granted, she grew up in the US, but she spoke Spanish to him in their home, and the workers in their home all spoke Spanish, so Daniel is fluent. His mother is thrilled to show him her country, and his father has an important business deal to consummate.

At their hotel, the Castellana Hotel Madrid, the service is impeccable, and Daniel finds himself drawn to Ana, a hotel worker who has been assigned to do whatever the Mathesons, including Daniel, need. She struggles with keeping her place, while wanting to help Daniel in his search for the truth of life in Madrid under Franco.

Told through the points of view of not only Daniel, but Ana and several of Ana’s family members, the readers see the life of a tourist, the hardscrabble lives of people who had the misfortune to have family members on the wrong side of the civil war (the Republicans), and those who worked for the Church in the orphanages.

While Daniel takes brilliant photos of what life is like in Franco’s Spain, Ana struggles with keeping secrets, hiding her growing affection for Daniel, and worrying about her brother, her sister, and her niece, all of whom barely survive while living in a one-room hut.

Sepetys brilliantly conveys the austerity and oppression of life in Spain and the fear-filled lives that the residents experienced. Readers experience that fear through the eyes of Rafa, Ana’s brother. Fugo, Rafa’s best friend, whose sole dream is to be a toreador, a bull fighter, so that he can help children, is a powerful character. He represents every child who was sent to a “home” where the children were tortured.

The plot is masterfully created to demonstrate the “present” life (1957) of the characters while also presenting Spain’s past and reflecting on how that past completely affects the “present” lives of Spain’s inhabitants. For example, Ana’s parents were teachers. Their dream was to have a Montessori school where children were taught according to the requirements of child development rather than the strict Catholic schools. Her parents believed in a democratic country, so they were brutally killed. Sepetys describes in detail how Ana’s mother was ruthlessly tortured and humiliated before her death.

And because Spain was a country filled with secrets, there are a few secrets that are shared by the end of the story. At the end, there is an author’s note explaining a bit more about the abduction of infants who were then adopted to more “deserving” families. She includes information about her sources and a list of reading material she used in researching for the novel.

While this is not a quick read at almost 500 pages, because the story is so engrossing and captivating, it’s a difficult book to put down. So the pages turn quickly as readers experience a range of emotions from the young love that Daniel feels for Ana to the desperation and heartache that her sister, Julia, feels for her sickly infant daughter. It’s an important novel about dictators, the dangers of absolutes and dogma, and the horrible results of persecution and terrible acts perpetrated on helpless victims in the name of religion.

Please note: This review is based on the final, hardcover book provided by Philomel Books, the publisher, for review purposes.