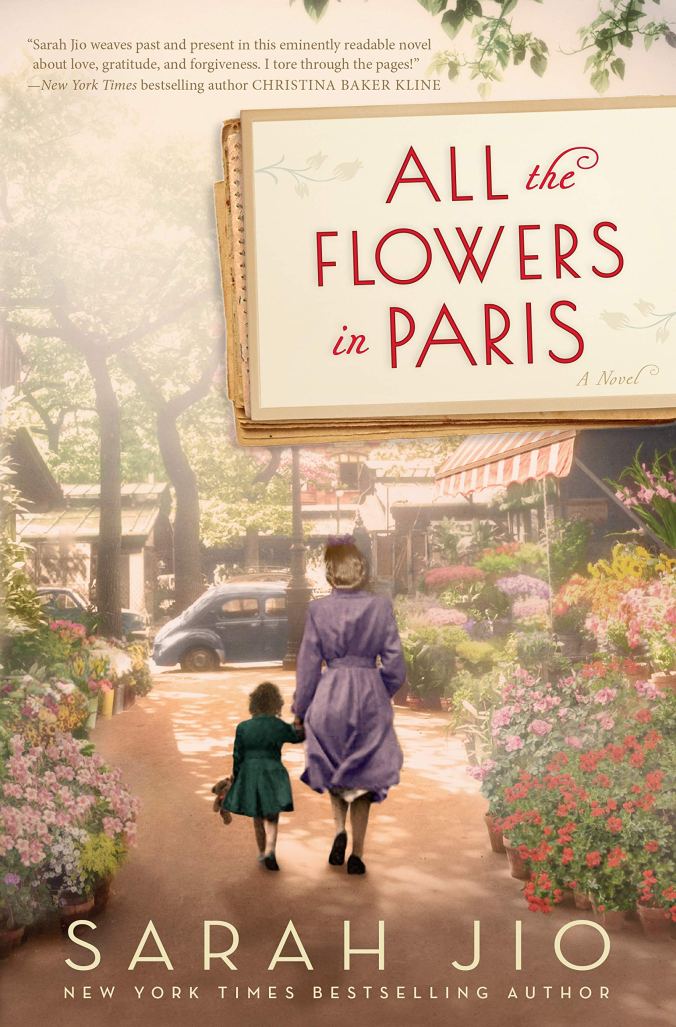 Paris, ostensibly the most beautiful city in the world, has a checkered past. During the German occupation in WWII, many Parisians collaborated with the Nazis. “All the Flowers in Paris” by Sarah Jio is about a French family with Jewish ancestry that is “outed” by a neighbor, and about a woman in modern Paris who loses her memory and must find out who she is and why she was basically a recluse before the accident that caused her memory loss. What she finds hidden in her lovely apartment gives her a mystery to solve, and by solving that mystery, Caroline not only finds closure for the long-ago Parisian family, but also for herself.

In the first chapter, Jio gives us a tiny glimpse of Caroline before she has the accident that causes her to lose her memory. But that peek into Caroline’s life brings more mystery than facts, and it’s that tantalizing bit of information that causes the reader to wonder throughout the book until the pieces all fit together. The second chapter introduces Céline, a widow with an eight-year-old daughter. Céline lives in Paris with her father, who also was widowed. Her father’s mother was Jewish, but they consider themselves French. Her father has a flower shop, and Céline helps him there.

Céline is being courted by a childhood friend, Luc, whose mother owns the famous restaurant Jeanty. Luc’s mother does not approve of their romance as she believes Luc could do much better than a widow who has a daughter and a father who is a shopkeeper. But Luc adores Céline and her daughter, Cosi.

The ramifications of the war, the Nazi hatred of Jews, and Céline’s Jewish grandmother all lead to the eventual targeting of Céline’s family, and the results are described in horrifying detail. At the same time, we read about Caroline and her search for truth. She is trying to find out more about her own life, and what she is learning is disheartening. She is also trying to solve the mystery of what she finds in her apartment, and solving that involves a bit of serendipity, and the conclusion she needs from the past might just be found in present-day Paris.

The setting, Paris, becomes almost a third main character in the story. We walk through Paris and see it through the eyes of the two women who both love the city. In fact, often we see the same streets 66 years apart as the women, who live on the same street, travel the city.

The two stories, seemingly independent, in some ways mirror each other. And the conclusion is where Jio brilliantly brings the stories together. It’s filled with emotion, wonderfully written, and it shows that love transcends age and that sometimes, out of the mouths of babes, great truths are spoken.

This review was originally posted on Bookreporter.com.

Please note: This review is based on the advance reader’s edition provided by Ballantine Books, the publisher, for review purposes.