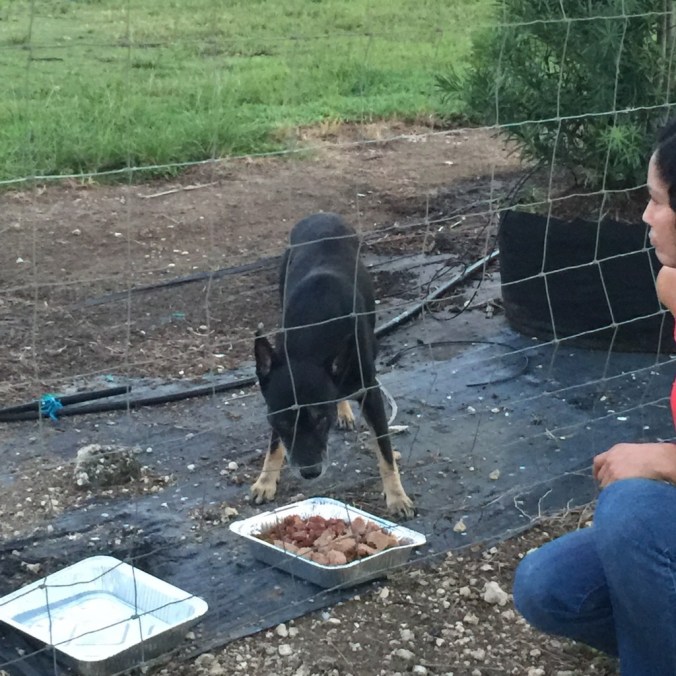 Please note: This article was originally published on ShelterMe.tv in 2016.

Redland, Florida; it’s a rural area southwest of Miami. A place that is haunted with the despair from the many animals who are abandoned there every week. Daily, cars and trucks stop on one of the streets or highways, open a door, shove out a confused animal, then drive away quickly.

The Redland area is not a safe place for the animals who are left there. Most are dogs, and while some learn quickly to stay away from humans, others are shot, poisoned, hit (on purpose) by cars, stolen by dog fighters; or they die from starvation and dehydration in the Florida heat. The lucky ones hide during the day, coming out as the sun goes down as a group of dedicated volunteers bring the food and water they need to survive. Join the volunteers, Jessie, Yleana, and Ramsey, on a hot July evening as they bring me along to witness the sad situation.

On this steamy hot F

lorida evening, the first dogs we see are two dogs behind a high fence. The owner of the property has moved and left the two friendly dogs locked behind gates. They are unable to leave, and the rescuers are unable to get them out. So the dogs come running over to greet their saviors, and the volunteers slide the trays filled with dry and canned food under the fence. They also slide a tray of water under the fence. Without that daily handout, the dogs would surely be dead.

The next dogs are down a deeply pot-holed dirt road. In the distance we

can see the black and white Jack Russell terrier and another dog. By the time we approach, they have disappeared. At the corner of one empty road and another deserted road that borders an unplanted field the volunteers get out of the car and set up the trays of food and water. These small dogs are smart enough to know that staying away from people will keep them away from dog fighters who would use them as bait dogs. Unfortunately, those same smarts make it extremely difficult for the rescuers to trap them.

filled with water, a few miles away another dog waits for his meal. A handsome Belgian Malinois has been left behind when his owner, who lived in a beautiful gated residence down the street, moved and left him behind. He’s frightened of people, but knows that these special people bring food and water. He won’t let them get close to him, but he stays close enough to start eating as soon as the car slowly leaves. He’s been there for weeks, months maybe, but they haven’t been able to trap him and rescue him.

Next is a visit to a nursery. There are several dogs we never see. They live among the growing plants and sprinklers. They are too shy to come but know that the food and water will be there for them every evening.

Perhaps the saddest part of the trip is seeing a new dog on the side of the road. A handsome purebred Rottweiler. He is missing patches of fur on his back, and has mud streaked down his hind legs. He is thrilled to see friendly people and jumps on us for attention. When the tray of food is put in front of him, he eats as if he is starving. He probably hasn’t eaten in days — or longer. He eats the whole huge tray of dry and canned food, and then turns back to us for more attention. Ramsey uses the scanner they carry with them to check for a chip, but there isn’t one.

Because they don’t have a foster home or rescue waiting for him, they can’t bring him back in their car. They see him once more, the next day. He shows up for food for a few days, then is gone. Where? No one knows.

After leaving food for more dogs, the last visit is to a small trailer on a large property. There lives a dog and a cat. The dog was hit by a car six months ago, and her leg was injured as a result. The volunteers offered to take her and get her medical treatment, but the owner refused. Then, suddenly, a few weeks ago, she told the volunteers that she was moving and leaving the dog and cat behind.

This German shepherd mix wandered over to the same property a few months ago and is being fed, along with Jessie, by the volunteers. They do have a foster for this dog but have been unable to catch him yet.

It is dark now, but there are still a few places to visit. One is where a white, female Dogo mix has been holed up under a trailer. She is very scared of those who come to feed her, had disappeared for a few days, and then reappeared. This particular night, there is a new dog there keeping her company. The large black and white dog barks ferociously at the car, but Jessie is determined to go out to leave food. “Take this stick, just in case” advises Yleana. But when Jessie leaves the safety of the car, the dog just backs away, frightened. He is skinny, and when the tray of food is placed down and we have backed off, he gulps down the food as fast as he can. Once he finishes, it is obvious that he wants attention, but is just too scared to come close. By the next week, he is confident enough to jump on the truck to get petted and greet another dog.

There are two more stops in the dark, one to an empty field where no dogs can be seen, but they know the dogs are close and waiting for food. And at the last stop, the long-haired tiny Chihuahuas come running

out, but not close enough to pet or catch. Someone living in a house next door had contacted Yleana and told her that the two dogs had been thrown over his fence into his backyard. He didn’t want them and opened the gate. Now the small dogs rely on Jessie and her group to live. They are smart enough to stay away from those who might harm them, but also making it difficult to catch them and save them. Many of these dogs are too smart to be trapped, stymieing any attempts to rescue them. (Note: these two dogs were finally caught and brought to safety after three weeks of dodging cars and waiting to be fed by this group. They will now find loving homes.)

There are a dedicated group of volunteers including Jane Ziemba, Ale Ochoa, and Cheryl Jackson who visit the Redland area and another similar area — the Rock Pit Quarry. In both places they feed and water the animals, take pictures, try to find rescues to take the animals, and try to find fosters so that the rescues can take them. For example, the Rottweiler has a rescue group interested in taking him, but they have no foster home available. A local foster would save his life.

The group has formed a 501(c)3 nonprofit, Redland Rock Pit Abandoned Dog Project, so any donations to them are tax-deductible. They use and need all kind of animal-related items from food (dry and canned) to flea and tick preventative. A link to their Amazon wish list can be found on their Facebook page. But more than donations, they need local fosters so that they can take the animals directly from the streets and get them to safety. Leaving behind a friendly, desperately sweet dog who is ready to jump in the car is heartbreaking. But no one can take home every dog they meet, and most of the volunteers already have more dogs than reasonable.

Please, if you have room in your home, offer to foster through a local shelter or rescue. Each time you take in a dog, you will be saving a life. And for those who think it’s too hard to give up a foster to another family — you must not have enough pets. When you foster and already have four cats and three dogs of your own (as I do), giving up that eighth creature is not difficult. It’s sad, and tears are shed, but knowing that because of you this creature that you’ve come to love has been saved is a great reward.