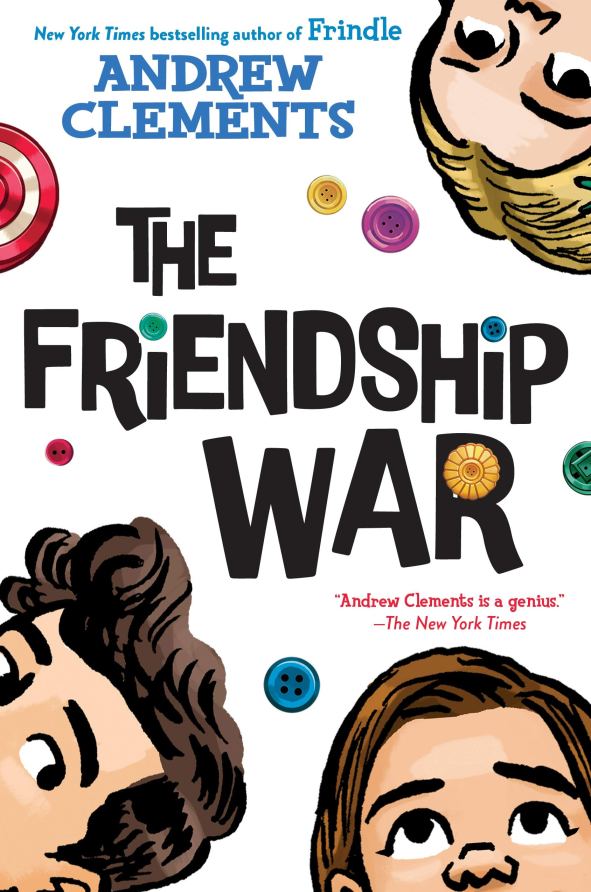 Andrew Clements is the king of middle grade novels centering around school and relationships. “The Friendship War” continues his long and prolific string of books about elementary school relationships that explore how children relate, how they form friendships, and how the school environment can influence those life experiences.

“The Friendship War” starts with Grace’s summer vacation as she visits her grandfather on the East Coast. He shows her an old building he purchased to fix up, and in the building are boxes and boxes of buttons, remnants and mementos of the building’s previous function as a mill. Grace is a budding anthropologist — she collects artifacts. She asks her grandfather to send her the many boxes of buttons, not knowing what she might do with them.

But when her sixth grade class begins a study of the Industrial Revolution, she mentions that she visited an old mill building in Massachusetts over the summer. Her teacher encourages her to bring in her photos and artifacts. Grace discovers that the boxes don’t just contain the small gray buttons she had seen at the mill; other boxes contain different buttons. There are huge buttons, tiny buttons, buttons in every color of the rainbow, even buttons that are almost like jewels made out of bone, glass, shell, some that look like diamonds and pearls, some in the shapes of animals and stars and snowflakes.

Grace prides herself on being a scientist, and she wants to organize her buttons. The kids at school are entranced by her button collection, and they want to see them at lunch. When they talk about the buttons they have at home, Ellie, Grace’s best friend, suggests that the next day, everyone bring buttons from home to compare.

Grace’s relationship with Ellie has always just been a friendship during the school year because Ellie’s family travels during the summer. They have plenty of money, and Ellie loves to talk about her clothes from Paris and the wonderful places she’s been and the wonderful things she’s done. Grace is the sidekick, never overshadowing Ellie, always following Ellie’s lead, always letting Ellie decide what they should do. But when Ellie suggests everyone bring buttons from home, Grace knows it’s because Ellie thinks she has better buttons than everyone else. Grace hadn’t told Ellie about her huge collection when they first saw each other at the start of the school year because Ellie only wanted to talk about her summer, not Grace’s.

So the next day, the science experiment begins. It’s not really a science experiment, but Grace looks at how the buttons change the school atmosphere and the students — literally. The kids are entranced with the buttons, and the fascination grows and spreads until all the kids at school are trading buttons, hoarding buttons, making things with buttons, and talking about buttons. Grace takes mental notes of what is happening throughout the process, even though she admits that she has become part of the trading and button-craze, too.

Grace and Ellie end up fighting, not overtly, but subtly, over the buttons. Ellie, always used to having and being the best, isn’t used to Grace’s competition. And Grace is tired of always being second, and excited — but also confused — about her relationship with Ellie. At heart, Grace is a good and honest person. Is Ellie? Is Ellie the kind of person Grace wants as her best friend? And Hank, the brilliant student scientist, is very interested in Grace’s button collection. He studies it and teaches her about the buttons she has, many of which are valuable.

When Grace does something to try to end the button craze — which has gotten out of control — and her efforts backfire, who will come to her aid? It’s the mark of a true friend to help a friend when he or she needs it. The ending is pure perfect Clements, and this book deserves a place on the shelf alongside such Clements classics as “Frindle,” “The Janitor’s Boy,” “The Jacket,” “No Talking,” “A Week in the Woods,” “Lunch Money,” and “The School Story,” to name just a few.