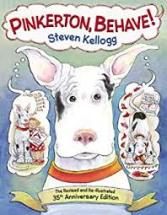 From an updated classic to a new, thoughtful story filled with questions, these four dog books, picture books for young and old children, will delight all kinds of readers. Especially dog lovers — and aren’t most kids dog lovers at heart? 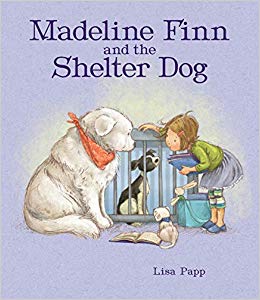 a library therapy dog. In this new adorable and thoughtful story, Madeline manages to convince her mother that they should get a dog. At the end of the first Madeline Finn book, the big, white, fluffy library therapy dog Bonnie had puppies. They will get one of Bonnie’s puppies. Madeline names the puppy Star, for the reading star she wanted so badly in the first book, and which she received with Bonnie’s help. After Madeline gets her puppy, Mrs. Dimple, the librarian and Bonnie’s mom, tells her about animal shelters. The illustration shows that Bonnie came from a shelter, and Mrs. Dimple tells Madeline and her mother that she volunteers at a shelter. Madeline and her mom go to the shelter and realize that the dogs there are sad, so they return with towels to make soft beds for the dogs. But there aren’t enough towels for all the dogs. At home, Madeline realizes how much Star likes it when she reads to him. She collects towels and blankets from neighbors and makes signs to ask people to come to the shelter to read to the dogs. Madeline’s efforts are a huge success, and any dog lover will have a tear in the eye by the end of the book. It’s a wonderful thing when books teach kids about kindness and compassion. By showing children reading to homeless dogs and adopting homeless dogs, kids learn that good deeds are their own reward. And reading to shelter dogs is a wonderful way for dogs to get attention and company — it’s happening in many shelters. Check for one near you. (Peachtree)

He’s an adorable huge great Dane, but he doesn’t understand his obedience commands at all. Instead of listening to “come,” he runs. Instead of “fetch,” he destroys. Instead of “bark,” he gives hugs and kisses. After teaching the other dogs in his puppy obedience class the wrong way to do things, he is kicked out.  His family loves him anyway. And when a burglar shows up to rob the family, the clever daughter knows just what to do. And Pinkerton saves the day! This is a wonderful story with a fabulous message that we don’t all have to be perfect, and that sometimes our imperfections are wonderful, too. (Puffin Books)

“Felipe and Claudette” by Mark Teague will charm and enchant readers. Felipe is a

grumpy cat, a quiet cat, and as far as can be from being a cute perky kitten. He is exasperated at the antics of Claudette, the goofy, overly-energetic, loud dog. Teague fills the story with humor, and it becomes crystal clear, when week after week passes with no one adopting either animal, why that is so. Felipe tells Claudette that, ‘”You will never be adopted because you are constantly barking.” “What?” Claudette barks. “What what what?”‘ and the narrator explains that “To be fair, Claudette did not always bark. Sometimes she tore the stuffing from her toys. Sometimes she ran in circles. Sometimes she bounced against the walls.” Who would want a dog like that? Finally, someone comes to the shelter, and even after being told that Claudette “runs in circles and rolls in garbage and snores when she is wide-awake,” adopts her. But the adoption doesn’t turn out as expected, although the very happy ending might just be what every reader has expected (or wished). Kids will love the idea that although Felipe and Claudette are complete opposites in terms of behavior and disposition, they — in the end — love each other. (Orchard Books)

Last, but far from least, is “Little Brown” by Marla Frazee. Little Brown is a cranky dog. Really really cranky. We meet Little Brown at the dog park, where he sits facing the fence 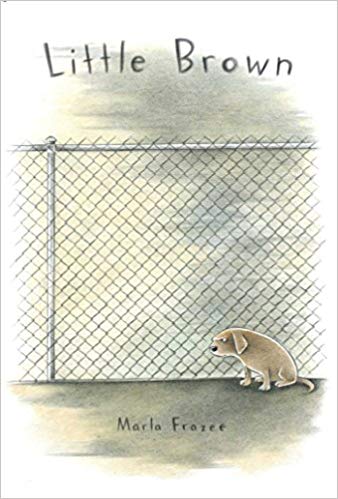 with his head hanging down, obviously sad. No one plays with Little Brown. And here, author Frazee does something wonderful. She lets readers think about why this might be so. Was Little Brown cranky because no one ever played with him? “Or maybe no one ever played with him because he was cranky.” Little Brown watches the other dogs playing cheerfully together, having fun, and he gets crankier and crankier. When Little Brown starts to take away all the toys the other dogs are playing with, none of them knows how to react. It’s just like real life, when kids might not know how to react to the behavior of a child. What should they do? And Frazee doesn’t give an answer — because there is no right or wrong answer. But this beautifully written book can start the dialogue. The illustrations deserve a mention because they are beautiful. The endpapers are “photos” of the different dogs with their names pinned up on what appears to be a bulletin board. The dogs in the front and back endpapers are different, but they are the dogs featured in the book’s illustrations. Kids will have fun matching up the dogs in the story with their names. It’s a picture book that will appeal to kids of different ages on different levels. In fact, I first became aware of this book when a bookseller at my local bookstore pointed it out to me and asked me what I thought of the ending. I love it. (Beach Lane Books)

One thought on “4 adorable picture books with doggy heroes”