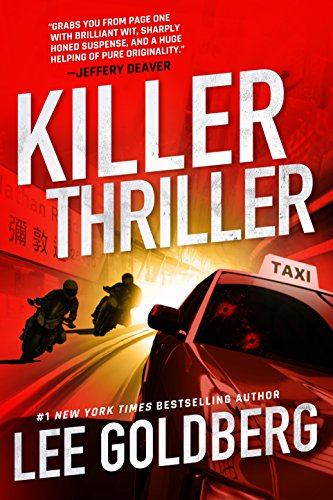 Story within a story, play within a play, movie within a movie. Authors, playwrights, and screenwriters — usually clever ones — do it often. But Lee Goldberg takes the concept several crazy steps beyond that relatively simple technique in his latest novel, “Killer Thriller.” Here, the stories wind around and through the main narrative like a long river running and twisting through a countryside. Novels inside novels, movies inside novels, movies inside movies — it’s downright dizzying — but incredibly entertaining.

The whole concept revolves around the occupation, and offshoots thereof, of the main character, Ian Ludlow. He, you see, is an author of suspense novels which seem entirely unrealistic, all-time champs at demanding willful suspension of disbelief. But his novels are huge sellers, so widely and wildly gobbled up by readers that movies based on the novels are virtually inevitable. But there’s a catch, a trap, a twist that becomes a blessing and a curse for Ludlow.

The plot of his previous novel (and Goldberg’s, of course!) had turned out to be so close to the truth about a nefarious real-life plot that Ludlow had innocently placed himself into deep real-life trouble. Then, here in “Killer Thriller,” he ironically, miraculously, and unconsciously pulls off the same trick. This time, it involves a Chinese plan to take over the world, to become inarguably the world’s most powerful nation. His novel is a prophecy, and the Chinese government takes it as a warning — they must eliminate Ludlow. And they want to do it during the shooting, in China, of the movie adaptation of a Ludlow novel. Goldberg even provides us with a rundown of the film script. Murder, mayhem, mystery, and for us readers, plenty of laughs along the way.

Goldberg has a light touch which he manages to turn into an extraordinarily effective vehicle for suspense. The characters produce laugh-out-loud dialogue, but their ultimate fate remains seriously questionable until the final scene. Goldberg is masterful. And “Killer Thriller” is a superbly suspenseful, dark-ish comedy novel that will wind its way right into your perhaps-incredulous psyche. (Jack Kramer review)

Please note: This review is based on the final hardcover book provided by Thomas & Mercer, the publisher, for review purposes.