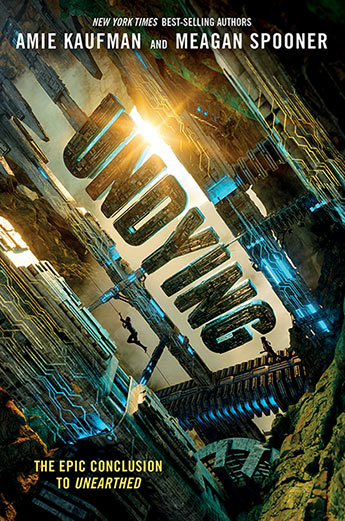 Amie Kaufman and Meagan Spooner, authors of “Undying,” have done a spectacular job writing a two-book sci-fi series in which both books are completely filled with action, two very likable and admirable characters, great settings, and over-the-top suspense.

In the first book “Unearthed,”  Mia and Jules meet on a harsh planet in a faraway galaxy. They are both struggling to survive, and while they are both close in age, they are universes apart in background and education. Mia is a scavenger trying to find a treasure to save her sister. Jules is the highly educated son of a scientist who was imprisoned for his heretical beliefs about the writings of an alien culture.

In fact, Earth has benefitted from alien artifacts and technology that have created clean energy and started to save the planet. Mia and Jules are looking for more such technology on the planet Gaia. At the end of the first book, “Unearthed,” they are on the alien space ship that has been started and is ready to take off.

“Undying” takes the two back to Earth on the alien spaceship. In the beginning of the book, the authors kindly recap the events of the first book, so those who read  “Unearthed” a year ago feel up to date on the events. (It’s wonderful and thoughtful and very helpful.) The two stowaways on the ship, Jules and Mia, manage to survive — barely — taking absurdly dangerous risks to get back to Earth on a shuttle.

But back on Earth, they find it’s impossible to get anyone to believe that there are aliens on the spaceship planning to take over Earth. One of the heads of the International Alliance, the agency that controls space travel, does not believe them. They must escape and try to find someone who will believe them. But can two teenagers save the world?

It turns out they may not be alone. Jules’ father, Addison, had been ridiculed and shunned by the scientific community when he said that the glyphs and language of the aliens also contained a warning that following the clues might lead to destruction of Earth. No one wanted to hear that; they just wanted the alien technology — the “treasure.” But the warnings, accompanied by the drawing of a nautilus, were real. Does anyone exist who will help Jules and Mia? Can they get to Jules’ father in time to thwart the alien’s genocidal plot? Will he know how to stop them?

This brilliant sci-fi novel is gut-wrenching. The twists and turns (and jumps from trains) will keep the reader turning page after page to see what happens next. Really. Don’t start this book unless you are prepared to stay up late reading. The ups and the downs and the surprises don’t end, but there is plenty of humor in the pages, too.

All in all, both books are great reads. And while the books are cautionary tales of how we are destroying our planet and what might lie ahead if we don’t change our ways, for the most part this duology is a fabulous escape novel. Definitely read both books for twice the enjoyment!

Please note: This review is based on the uncorrected advance proof provided by Hyperion, the publisher, for review purposes.