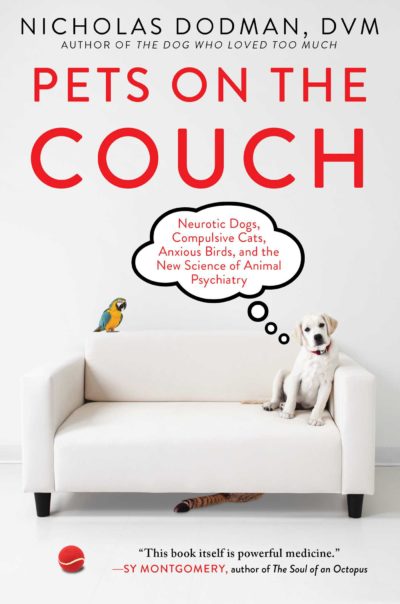 “Pets on the Couch: Neurotic Dogs, Compulsive Cats, Anxious Birds, and the New Science of Animal Psychiatry” is written by veterinarian Nicholas Dodman, who also wrote bestsellers, “The Dog Who Loved Too Much” and “The Cat Who Cried for Help.”

Dodman breaks new ground with this book; he details how animals and humans share many of the same emotions and emotional disorders. He writes that animals can be depressed and feel grief and loss. It’s now known that pets can have post-traumatic stress disorder, and Dodman has asserted that this affects dogs who have served in the military in combat zones. Dogs can also have other “human” emotional disorders like anxiety and compulsive disorders.

The publisher says that this is “the first book by a veterinary scientist to point out that most past and traditional treatments of many emotional disorders of pets have failed because vets try to treat the behavioral or physical symptoms (pulling out fur, self-biting, pacing, anxious behaviors like crying/barking/trying to escape enclosures, eating non-food items) rather than the source of the disorder, which are problems in the brain or mind.”

Dodman combines anecdotal stories with fascinating information about the mental and physical traits of dogs and cats and how that affects their behavior. There is information about how Dodman has used human psychiatric drugs like clomipramine and Prozac. Regarding such now-common treatments, he writes, “Our pets officially joined the so-called Prozac nation.”

But scientists have never been willing to admit that animals and humans not only have the same emotions, but can be treated with the same medications. Only recently has animal psychiatry become common. Dodman even writes about dogs he has treated for ADHD. Just as with humans, ritalin worked wonders, causing a destructive, hyperactive dog to behave normally.

This is a book that will enthrall all animal lovers, be they dog lovers, cat lovers, bird lovers or bird watchers. The writing style is very accessible even when Dodman discusses technical psychiatric terms. Every story is interesting and instructive.

In the epilogue, Dodman sums it all up: “Soon it will be very difficult for the naysayers to deny the parallels between animals and people. As Darwin realized, though animals aren’t people, people are animals.” He goes on to say, “We are all animals in this life together, and we should respect the right of nonhuman creatures to be treated kindly and respectfully.”

Please note: This review was first published on ShelterMe.tv.