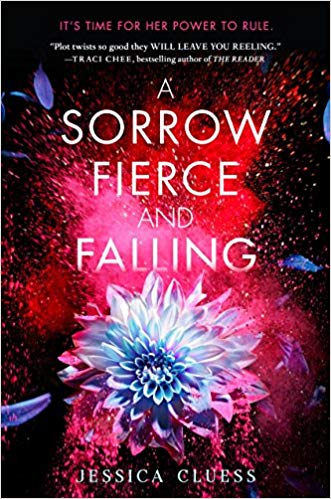 “A Sorrow Fierce and Falling” is the last in the “Kingdom of Fire” trilogy by Jessica Cluess. The series began with “A Shadow Bright and Burning” and continued with “A Poison Dark and Drowning.” In this brilliant finale, Cluess manages to keep the reader enthralled from the first page to the very last.

Henrietta Howel, the only female sorcerer in an alternate Victorian England, is pitted once again against the “Ancients,” monsters from another world that were let into this world by three people, a magician, a sorcerer, and a witch.

At the start of the story, Henrietta is due to marry Lord Blackwood, who has been named Imperator, the most powerful sorcerer, and the one who will lead the sorcerers against the monsters, who are destroying England. However, their wedding is interrupted, and they must fight the monsters who breach the security of the Blackwood estate.

The action doesn’t stop, and the characters that readers of the series have met and liked (or hated) continue to grow and change. Cluess’ writing is lovely in that there are few truly evil characters, and even the noblest of characters has real flaws. R’hlem, one of the worst monsters, was Henrietta’s father before he was sucked into another world where he had the skin flayed from his body. His two eyes were replaced by one eye in his forehead, and he controls a legion of fiends. Yet he is still Henrietta’s father, and he displays compassion for her and even, at the end, (spoiler alert) sacrifices himself for her.

The story deals in hatred, prejudice, betrayal, love, sacrifice, forgiveness, and many other strong human emotions which the reader will see are very human. And, in fact, the story shows that it’s very human to make mistakes, especially when in the throes of strong emotion. But in the end, most of the characters do the right thing, even, dare I say, the noble thing.

The ending is lovely, although the peace and happiness won by the main characters is tempered by the loss of lives sacrificed on the road to secure that peace. Readers will be truly satisfied, and most will be anxiously awaiting whatever Jessica Cluess is working on next. Can’t wait.