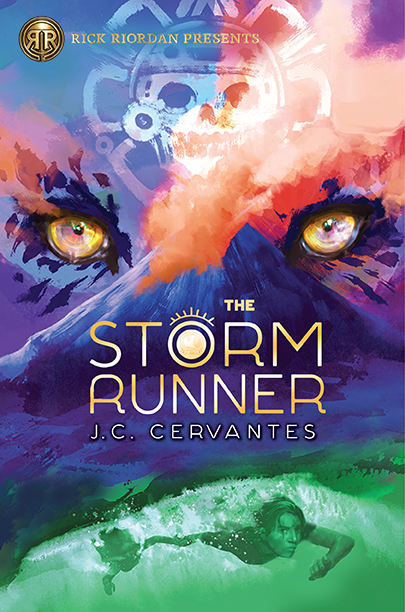 J. C. Cervantes is the talented author who has written the first book in a trilogy about Mayan gods and the kid who is the child of one of them. It’s Rick Riordan’s “Lightning Thief” taken south to Mexico (and New Mexico). In “The Storm Runner,” Zane Obispo, who limps because one leg is shorter than the other, discovers that he is godborn, the child of one of the Mayan gods. In fact, that explains his leg because as one character tells him, humans and the gods don’t mix perfectly.

When Zane finds out about the prophecy that has him releasing the god of death from his prison, he’s determined not to do that. Until he does. In the meantime, his much beloved dog Rosie is killed trying to help him, and from that point on, one of his quests is to save Rosie and get her back.

This version of child-of-the-god-inspired adventure works well for many reasons. Cervantes is a talented author, and her first book, “Tortilla Sun” is a fabulous read. She sprinkles Spanish throughout the story as a baker might add topping to a cupcake. There’s just enough without it being cloying. The characters are cleverly created and the humor replicates Riordan’s humor — which is a large part of the reason his series are so successful.

By creating a character with a physical impairment who is also a hero, Cervantes does a huge service to those who may not be physically perfect. Zane’s heart is always in the right place even when he makes mistakes. He’s scared but forges ahead anyway because he knows he must in order to save those he loves.

Readers will love the quirky characters, the deadly chili pepper, the loyal three-legged dog (perhaps my favorite), Zane, his uncle Hondo, and his new friends Brook and Jazz, a giant. This is a perfect choice for anyone who enjoys reading, adventure, and fantasy.

Please note: This review is based on the advance reader’s copy provided by Disney-Hyperion, the publisher, for review purposes.