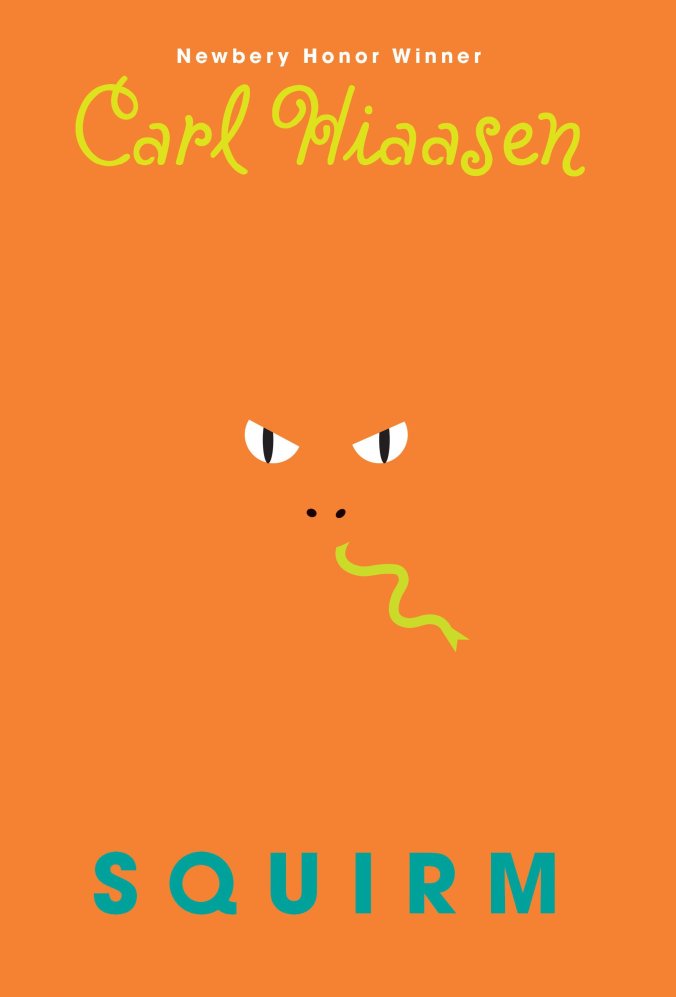 Carl Hiaasen’s adult books are crazy-wonderful, and his middle grade novels are just as crazy, but much more child-appropriate. They are crazy fun, crazy fabulous, crazily filled with wonderful animals, and wonderfully filled with crazy characters.

In this novel, which takes place both in Florida and Montana, Billy Dickens is the main character. He narrates the tale of his journey to find his father, and along the way he finds an unexpected extended family, performs some hero-worthy exploits, and develops appreciation for his quirky parents.

Like his mother (and father), Billy loves nature. He is fascinated by snakes, almost to the point of obsession. His facility with snakes leads to some hilarious moments in the story. When kids at his new school know the combination to his locker and mess with his stuff, he uses a very venomous snake to scare them away — a rattlesnake. Billy is most definitely not afraid of snakes although he does respect them.

In fact, Billy respects all wildlife. His mother is obsessed with bald eagles, and the family, consisting of Billy, his mom, and his sister Belinda, move to wherever there is a bald eagle family in Florida. Whenever the eagle family moves on, Billy’s mom moves them to another Florida location where there is an eagle couple. That’s the kind of crazy character that Hiaasen excels at creating — quirky people who are crazy enough to be real. But Hiaasen’s genius is that he makes the crazy characters really likable.

When Billy finds out his father’s Montana address from an envelope used to send the monthly support check and which his mother had neglected to shred into bits so small he couldn’t resurrect them, he decides to fly there to meet his father. He gets more than he bargained for, and also less. He doesn’t get to meet his father, who is away on a top-secret “mission,” but he gets to meet his father’s wife and stepdaughter, both Native Americans from the Crow tribe. In Montana, Billy also deals with a drone, a grizzly, and a rogue hunter.

It’s when Billy is back in Florida that he finally does get to meet his dad, and he, his dad, and his stepsister all embark on the epic adventure that proves equally dangerous and noble.

This book would be a wonderful read aloud for fifth or sixth grade. Kids from fourth through middle school will love the nonstop adventure, the self-deprecating narrator, the nod to those who save animal lives and those who love animals, and the whole fabulous package. It’s certainly the kind of book that the reader can’t wait to finish, but at the same time, the reader doesn’t want the story and the bonding feeling with the characters to end. These are some wonderful characters. I’d love to see another story with these same people, but Hiaasen wouldn’t do that (unless, Mr. Hiaasen, you read this and maybe think about it?). Instead, he’ll probably create another novel with equally crazy but just as wonderful characters and a new Florida adventure.

Please note: This review is based on the final, hardcover book provided by Alfred A. Knopf Books for Young Readers, the publisher, for review purposes.