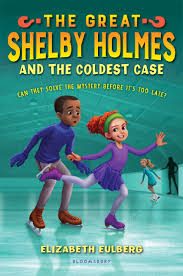 “The Great Shelby Holmes and the Coldest Case” is the third book in the clever series by Elizabeth Eulberg about a pint-sized detective named Shelby Holmes and her sidekick, John Watson. Both of the characters’ names, of course, are cute references to the famous duo of the Sherlock Holmes mysteries.

John Watson loves to write, and when he blogs about their mystery-solving skills, and a high-profile case brings them media fame, that fame also brings a new client to his upstairs neighbor and friend, Shelby. The new client is a Russian coach for figure skaters. Watson expresses his chagrin that when his beloved sports finally meet Shelby’s mystery-solving skills, it’s all about figure skating — a sport he knows nothing about. Jordan, a very talented young figure skater, has been receiving coded messages, and her coach, Tatiana, is sure that’s why her ice skating skills have been suffering.

In fact, when Holmes and Watson go undercover as figure skaters, it’s a pretty pathetic impersonation. Neither can skate at all. But that doesn’t matter in the end because skating has no part in the eventual solution to the mystery. It’s Shelby’s superior intellect, her ability to decode ciphers, and — finally — Watson’s perceptive eyes that all combine to protect Jordan.

As with any mystery worth its salt, there are many suspects, and the danger escalates. But the intrepid young detectives don’t give up. This story, like the others in the series, has many layers. The mystery is the hook that will keep kids reading each book, but the fascinating characters are what make kids want to keep the series.

Shelby, while brilliant, is not an easy friend to have. Like Sherlock, she is often self-centered and brusque. She doesn’t have a lot of empathy, and when she does think of others, or express emotion, it’s all the more notable. Watson is African American which isn’t a big deal in the story, except when he points it out by describing a character as “a tiny white girl.” Another clever touch which is good for humor is that Shelby thrives on sugar — candy, sweets, and cookies, a subtle reference, maybe, to Sherlock’s alleged dependence on cocaine. Watson, on the other hand, has diabetes and must be very careful about what and when he eats.

This book is most enjoyable, and kids will like trying to solve the cipher before Shelby does. The conclusion is believable, the main characters grow (we finally meet Watson’s father and learn more about their relationship), and a good time will be had by all.

While the novel could be read by strong third graders, the subject matter and mysteries will keep readers as old as middle school interested. The fact that Watson is in middle school makes this a great choice for middle school reluctant readers and those who just like a good mystery.

Please note: This review is based on the final, hardcover book provided by Bloomsbury, the publisher, for review purposes.

2 thoughts on “‘The Great Shelby Holmes and the Coldest Case’ by Elizabeth Eulberg: Can Watson and Holmes Solve the Mystery on Ice?”