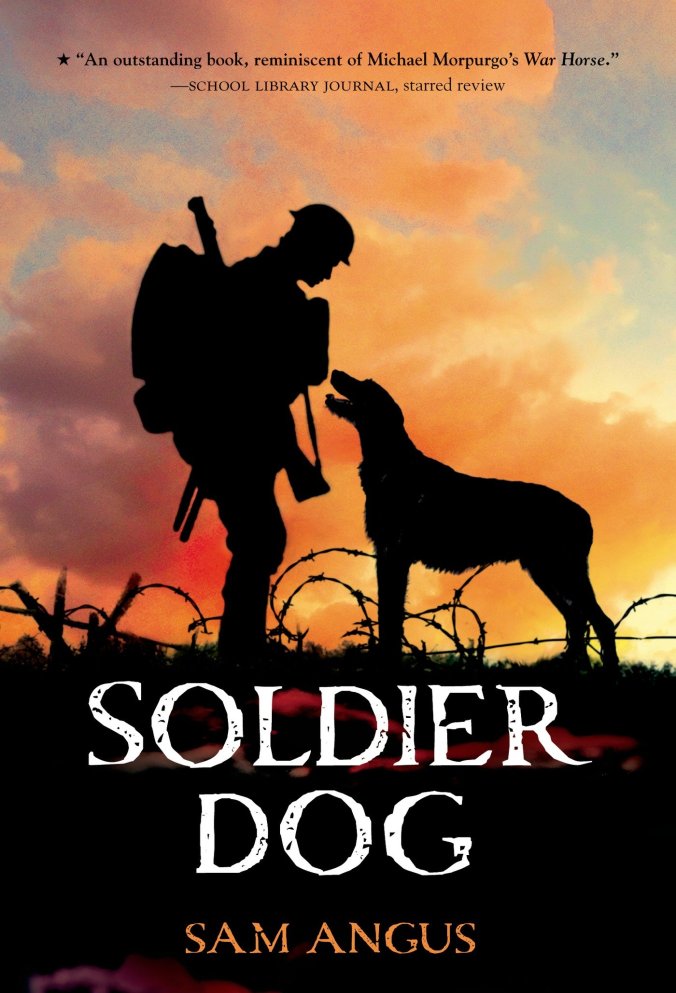 “Soldier Dog” by Sam Angus is the kind of story that lulls the reader along, reading about racing dogs and a boy who loves them and struggles with his bitter father while they live in rural England during the first World War. The boy, Stanley Ryder, joins the army even though he’s only fourteen because of something unforgivable that his father does.

He ends up in the school for War Dogs. He’s ordered to train an angry, aggressive Great Dane named Bones. Stanley accomplishes wonders with Bones, and because of the critical need for messenger dogs, they both are sent to France, and they both see combat.

Stanley sees more violence and killing that any teenager should see, and in one scene, he states an eternal truth about war that should resonate with everyone, even today — perhaps especially today. He says,

and throughout the story his heart aches for the puppy he had loved, a puppy who had met a terrible fate. He grows to love Bones as well, and the next dog he trains, Pistol.

It’s difficult reading — hearing about the dogs going through hell, dying, to bring messages from the trenches. But there is also the fact that the death of those dogs saved tens or hundreds of human lives, and the fact that those dogs were heroes. In fact, at the end of the book, there are several pages of historical facts and photos of the messenger dogs.

It’s a beautifully written book, and history buffs and animal lovers will really enjoy it. But be prepared for plenty of raw emotion as well!

Please note: This review is based on the final, hardcover book provided by Feiwel and Friends, the publisher, for review purposes.