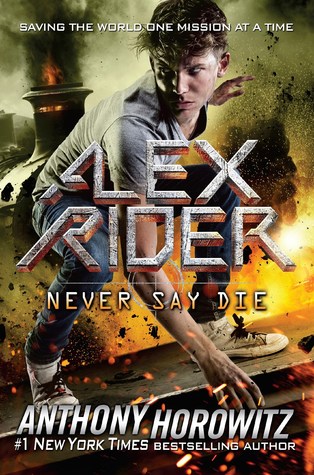 With “Never Say Die,” the latest Alex Rider thriller, Anthony Horowitz reminds fans of the series how good the stories are. New readers will get caught right up in the stories because once begun, they are impossible to put down.

The first paragraph consists of two sentences that hook the reader:

“Fifty thousand people had come to the Suffolk Air Show on the east coast of England. But only one of them was there to commit murder.”

A ruthless Serbian pilot hijacks a huge military helicopter from under the noses of thousands of people. Then it disappears in the English countryside. In the meantime, Alex is trying to get used to living in San Francisco with friends after Jack Starbright, the person who had been his nanny and was now his housemate and helper, was killed in front of his eyes.

But when Alex receives a cryptic email, he’s positive it’s from Jack. He leaves to find her, traveling to Cairo and the last place he saw her. Of course, Alex ends up being in the middle of several escapades, each of which is more dangerous than the last.

In the midst of it all are two incredibly horrible villains, twin brothers who are creepy in every sense of the word. Their kills and their reaction to their kills are even creepier than their physical appearance. Horowitz is a genius at creating fantastically terrible bad guys.

Kidnapped children of billionaires, an abandoned coal mine in Wales, and a yacht in the South of France all figure into this story. Alex and his particular kind of brilliance come through every time.

Horowitz is also a genius at writing a book that’s fabulous for middle grade readers but which will also enthrall young adult readers and adults as well. In fact, many adults who loved reading the Alex Rider series in their teens are thrilled that their favorite teen spy is back. When the series seemed to end in 2012 with “Scorpia Rising,” fans had to content themselves with “Russian Roulette: The Story of an Assassin” about the killer Yassen Gregorovich, who appears in many books in the series.

Now, a new generation of readers will be about to read and be thrilled by the new adventures of Alex Rider. Luckily for all his fans, Horowitz is keeping the series going with “Secret Weapon,” coming out in the summer of 2018. That story’s teaser is included in the last chapter of “Never Say Die.”

Please note: This review is based on the final, hardcover book provided by the publisher, Philomel, for review purposes.