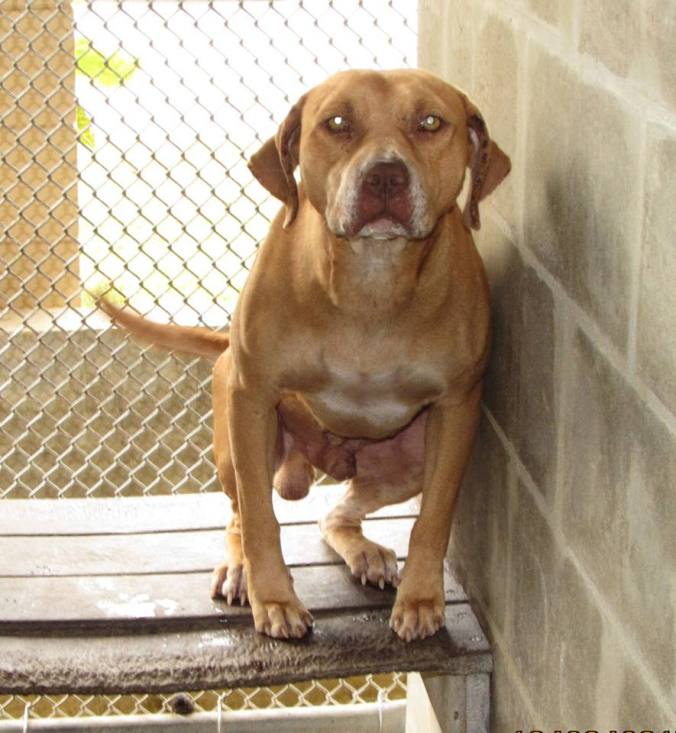 Update: Belle, Moon, Rosa, Parker, Silver, Pork Chop, Murry and Maggie (she wasn’t posted yet) have all been RESCUED by Bishop Animal Shelter,SPCA of Manatee County, Please honor pledges at www.bishopspca.org The volunteers at Sebring, FL say, “Thank you!!!!”

Tony was caught on camera with his tail mid-wag. He’s looking sweetly at the photographer with a gleam in his eyes, his body raised up as if hoping that the person taking the picture will stop and give Tony some affection. He wants it, desperately. And now Tony is one of many dogs who will be killed on Tuesday, November 21, unless he is pulled by rescue or adopted.

Tony isn’t petite or graced with curly locks. His nose doesn’t wrinkle up like a Boston Terrier’s. He doesn’t have a long plume of a tail like a Cavalier King Charles spaniel. In fact, Tony looks like many of the other dogs at this shelter. He’s a mix — that healthy blend of many breeds that gives the lucky ones longevity and few diseases and the unlucky ones death at the local county shelter.

While city and suburban shelters receive a mix of purebred dogs and mixes, rural county shelters like the Highlands County Animal Services get mostly mixed breeds, many of which look like pit bull mixes and hunting dogs. The shelter’s director tries to learn about the dogs and their personalities, but as with  most shelters, and especially small ones with few resources, dogs’ behaviors in shelters are often quite different from their behaviors in a home. That’s why responsible shelters advise adopters to take all animal introductions slowly and give new animals time to decompress and relax. (Read a great article about this here.)

So this shelter does advise slow introductions for all dogs and no cats for dogs who may seem to have a high prey drive. Experienced dog rescuers know that even dogs who seem aggressive in shelters may get along great with other dogs after proper introductions and lots and lots of patience. Even some of the Michael Vick dogs who were used for fighting were able to befriend (and even be bossed around by) other dogs.

If you are looking for a dog, please consider adopting from a local rescue. If you are interested in one of the Sebring, FL dogs — who all are urgently in need of rescue — please contact them. Transport may be available. But don’t adopt unless you are willing to commit for life. Too many tender-hearted people adopt a dog long-distance and then find that the dog is unsuited for their homes. What then? The dog is hundreds or even thousands of miles from the shelter, and there may be no support available. Many, many dogs who are adopted by people who want to help but have no idea what to really do are returned within hours, days, or months. Please pledge money if you can to help rescues pull these dogs. Pledges help defray the cost of vetting and caring for the dogs rescues help. And please share this story about these dogs, each one wonderful in his or her own way, who are desperately in need of help.

Also, don’t blame the shelter for killing the dogs. Every day they get in more and more abandoned dogs, some strays whose owners left them to fend for themselves, others dogs who the owners surrendered because they were no longer wanted. A few might be at the shelter because their owners were no longer in a position to care for them. But no shelter, no matter how well-funded, can care for an unlimited number of animals.

Please note volunteers work with the shelter to take videos of all dogs. Some links were not able to be embedded below. All videos can be found here. 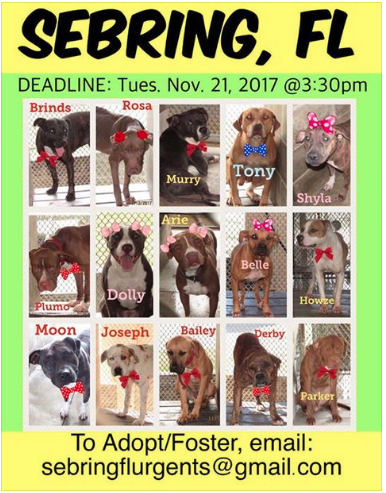 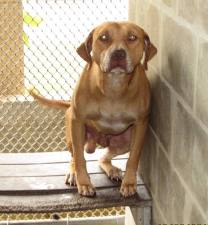 Tony loves people, and just watching his video will make you smile as he wriggles and rolls over to get more petting.  Unfortunately, as much as he loves people and has a non-stop wagging tail, he was surrendered by his owner for killing a cat. That means Tony should not go to a home with cats or other small animals. But for chilling on the couch and snuggling? He’d be perfect! There is more information on how to help Tony on his Facebook post. He will die on Tuesday if no one adopts or rescues him. He is around four years old, around 50 pounds, and is ID#34847.

Brinds is a sweet dog who has been at the shelter the longest, and the volunteers can’t 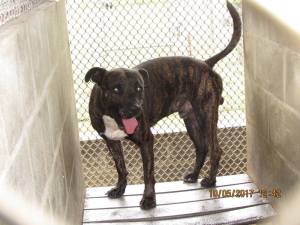 understand why. They say he is “absolutely stunning” and “quiet and sweet.” He’s a young dog, only about two years old, and a large guy at 63 pounds. His video shows his tail — wagging constantly — and his playful, curious nature. He’s a handsome dog and probably was given extensions of time because of his wonderful personality. He should go to a home without cats. If you want a loving, sweet dog, Brinds is the guy for you! Visit his Facebook post for more information about how to help him. He is ID#34643. 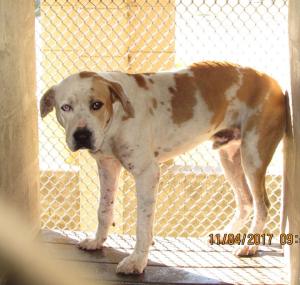 Joseph is a four-year-old white and tan dog who looks like he’s seen some hardship. Yet he’s sweet and gentle and loving. In his video, the person petting him says he seems a bit frightened of cats, so with slow introductions, he might get along with all kinds of other animals. He has some scabbed-over wounds on his neck and legs — no one knows how he got them. He’s described by the volunteers who have met him as sweet and quiet. He might be overwhelmed at the shelter. He is around four years old, so he’s past the puppy stage for someone who just wants a quieter, affectionate guy. There is more information on his Facebook post. He is ID#34931.

Dolly is a young dog, barely out of puppyhood, which explains why she loves to run and 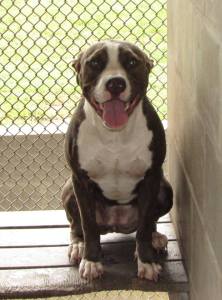 play when she is taken out of her kennel. A kennel is no place for a playful puppy. She should be in a home, getting lots of exercise and training so that she can reach her potential as a loving companion. Dolly craves attention so much that when volunteers and workers walk by her cage, she sticks her paw out, hoping that it will entice someone to stop and give her some loving. Dolly should be in a home with no cats, but should get along with dogs. Like all shelter dogs, Dolly should be given a chance to decompress and meet new four-legged family members slowly. Dolly is ID#34716. Dolly’s video is short, but shows her happy demeanor and wagging tail. 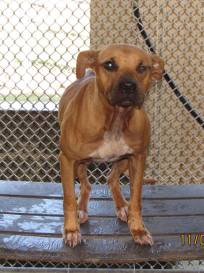 One can only guess at what Belle lived through before she ended up at this county shelter. She is around four years old and under 40 pounds, but she has an old eye injury that was never treated (looking at it is painful). Yet in spite of the discomfort of that injured eye, she is sweet and affectionate.  But because of that injury, Belle really needs pledges because any rescue considering pulling her will need to have money for her medical care. In her video, she seems to be calm and sweet. She appears to love getting attention! Belle is the kind of dog who would be especially thankful for a home because she has probably never had one. Belle would be better in a home with no cats. She is ID#34859. There is more information on how to help and pledge for Belle on her Facebook post.
Derby is a sweet, calm boy who is under 50 pounds and probably only around three

years old. He’s sweet, and his tail doesn’t stop wagging. He has a minor skin irritation, but that doesn’t stop him from loving being out of his kennel and getting some attention. Watch this wonderful dog’s video and see how handsome he is! There is more information on his Facebook post about how to help him. Derby would do better in a home without cats, and slow introductions to dogs are always recommended. He is ID#34953.

Moon is a handsome young dog who appears to be calm on his video. He’s looking around at all the dogs barking and enjoying getting some petting. Volunteers note that he especially enjoys being scratched behind his ears. He would do best in a home with no cats and a slow introduction to dogs. Moon is ID#34845. There is more information about how to help Moon on his Facebook post.

There are eight more dogs who will be killed on Tuesday if no one steps up to adopt or rescue them. Please see their pictures below. Because of space issues, there is limited information about them included here, but there are links to their Facebook posts and videos. They are all dogs who are worthy of rescue, all dogs that the shelter workers and volunteers are trying to save, and all dogs who, with some training, could be fantastic family dogs. 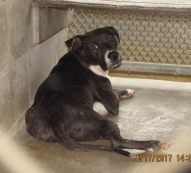 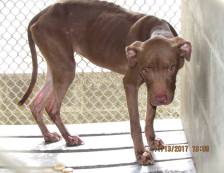 Rickie
From left to right again are:

From left to right again are: Plumo (ID#35010) is a big dog who is only about three years old. He is very sweet but needs to be the only pet. His video shows that he like affection and is calm. Bailey (ID#35013) is only two years old and is a very big, handsome boy who needs training. He loved the head scratching on his video.  Howze (ID#34963) is around two years old and under 50 pounds. He is dog selective (he wants to be alpha) and doesn’t like cats. His video shows that he loves his ears rubbed! Rickie is rescue only. She is a pretty senior dog who has special needs, probably due to a abuse in her past. She is very nervous (especially around men) and cannot live with cats. She should also not be around small children (maybe they mistreated her in her past?). She hates being crated, but her caretaker sings to her and she loves it! Her video shows that she loves to be petted, but she knows the caretaker well. There is more information on her Facebook post.

Please note that if you want to help these dogs, you must visit their Facebook pages. Posts made on this page will not be seen by the shelter or the volunteers! Please share this article with friends and others who might pledge or otherwise help these dogs.

10 thoughts on “31 Dogs Have Nothing to Be Thankful for; All will be Killed Before Thanksgiving”