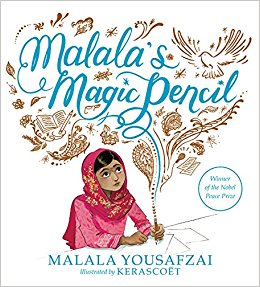 While the name “Malala” is quite familiar to adults, children may not know who the author of this picture book is. In “Malala’s Magic Pencil,” Malala Yousafzai tells her story and it’s one that opens the eyes of the kids hearing her tale.

She starts her story telling about a show that she watched as a child about a magic pencil that could create anything that was drawn with it. The boy who used it, the hero, always used the magic to protect people who needed help. Malala thought of the things she would do with a magic pencil.

She wanted to use a magic pencil to make people happy. She wanted to create beautiful dresses for her mother and a great building for her father so he could have many schools where children could study for free. (It’s great to explain to students that in other countries, people have no free public schools.) She would create a “proper ball,” so her brothers and Malala wouldn’t have to play with an old sock stuffed with garbage. (Again, it’s difficult for most children to understand a place where it would be difficult to even afford a ball.)

Malala shares her experience going to the local garbage dump to throw out their trash and seeing children “playing” in the piles. Her father explains that those children can’t go to school because they must sort through the trash to find things their family can sell to support them. The children have to work or the family can’t eat.

When the laws in her country changed so that girls couldn’t attend school, Malala kept going. She began to write about the challenges that she faced in trying to get an education.  She tells the readers:

“My voice became so powerful that the dangerous men tried to silence me.

The subject of the attack on Malala when she was shot in the head is not explained or mentioned in detail — only the quote above. The whole book is beautiful and very moving. First grade students listened attentively without making a sound as it was read to them. They had lots of comments and questions after. The picture book is appropriate for children aged five and older.

The illustrations deserve a mention. They are beautifully rendered in watercolor and ink. Throughout the book, many of the lines and shading are in beautiful gold ink. The illustrators use white spaces to great advantage, and on one page, after she is hurt, black instead.

This picture book is a must-have for school classrooms, libraries and those who want to teach their young children about injustice and bravery.

Please note: This review is based on the final, hardcover book provided by the publisher, Little, Brown and Company Books for Young Readers, for review purposes.