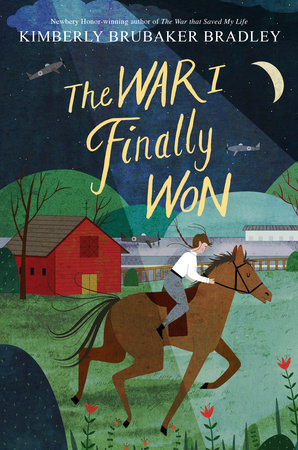 It’s rare when a sequel is just as beautifully written and just as touching (maybe even more so) than the first book. Kimberly Brubaker Bradley accomplished this difficult feat with “The War I Finally Won,” the sequel to “The War that Saved My Life.”

Ada is the main character in both books, and it’s her story, that of a child who has endured unimaginable abuse and cruelty, who has struggled through life with a disability, yet who emerges strong and brave. That story has enthralled readers and made tens of thousands of them weep.

This novel continues where the first one ends. Ada is just about to have surgery to correct her clubfoot. At the end of the first book, Ada and her brother have returned to Kent with Susan, the person who has cared for them and loved them since they went to stay with her as evacuees from London and the Nazis’ bombs. Susan’s house had been destroyed by a bomb, but the destruction occurred when she had traveled to London to bring Ada and her brother Jamie back to live with her, so they all were saved. Butter, Ada’s beloved pony, survived the bombing.

The story builds on the characters from the first story with the addition of one important character, Ruth. Ruth and her family are refugees from Germany, Jews who managed to escape Germany and flee to England. The rest of their family refused to leave with them. Ruth’s father works with Lord Thorton on a secret project and her mother is in an internment camp (because she is German), and Ruth, who is applying to Oxford, comes to stay with them so that Susan can tutor her in maths (as they say it in Great Britain).

Lord and Lady Thorton generously give Susan and the children the use of a cottage on their grounds. When the British government decides they want to use Thorton House for the war effort, Lady Thorton moves in with the small family. Maggie, her daughter and Ada’s best friend, stays with them on holiday from her boarding school

The story is filled with details about life in the British countryside during WWII, but it’s also the story of Ada’s struggle to learn about the world around her. An important part of Ada’s struggle is to learn that she’s worthy of love. Bradley does an incredible job creating a character who realistically represents how an abused child might react.

Ada is at times a difficult character to like. She’s suffered much, but to an uninformed reader, she often appears to be sullen and ungrateful. The reader might question why Ada doesn’t just accept that her mother was a horrible, cruel person and be grateful for her new loving guardian. Well, it doesn’t work that way — in the novel or in real life.

Often, abused children can’t get over the abuse and believe, at least on some level, that since their mother treated them that way, they must deserve it. Children want to know that they were loved and cherished by their birth mother, and Ada’s mother clearly didn’t love her — quite the opposite, she hated her and let her know that at every opportunity.

Bradley writes the story in such a way that the reader is by turns both touched and then, pages later, heartbroken. Over and over.

Teachers (and parents) will love the many messages that resonate throughout the book. A huge message is the detailed emphasis on the horror of war. Throughout the book, loved ones are killed by the war, either as casualties, as soldiers, or in concentration camps. Yet at one point, Lord Thorton says that as the government has learned more about Hitler’s agenda, he at least knows that fighting Hitler is a just cause and that those who died in the war died fighting for the side of right.

The other message is one of love and strength. Ada manages to recover from her decade of abuse through her strength and through the love of those around her. It’s when others need her, and she finds the resources to help them, that she realizes how capable she is and that she is in control of much of her life.

The ending is beautiful. It will serve to remind readers that sometimes, our fear of rejection can serve to isolate us from others, and that even with that very real possibility, it’s worth reaching out to others.

Please note: This review is based on the final, hardcover book provided by the publisher, Dial, for review purposes.