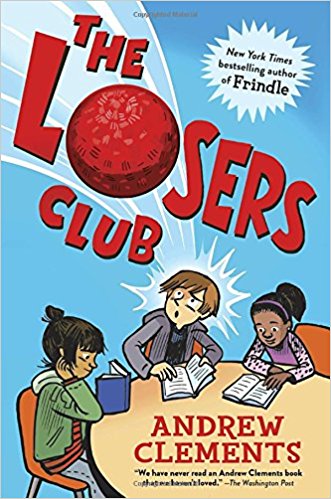 “The Losers Club” is by the prolific and talented Andrew Clements. He is the author of tens of beloved middle grade books, including the wonderful and famous “Frindle.”

With “The Losers Club,” Clements creates a main character who loves reading above all else. At least that’s what the reader learns at the beginning of the book. But as with all good literature — and Andrew Clements writes nothing if not good literature  — Alec Spencer, the protagonist, is much more than he appears to be at first glance.

Alec’s life is on the cusp of change at the beginning of the book. He and his younger brother Luke must stay at school after the school day ends because of a change in their parent’s jobs. They have to join the Extended Day program. And that’s a huge problem for Alec.

Alec has been used to reading during every spare minute. And some not-so-spare minutes — like when he is supposed to be in science or English or music, where it’s often easy to hide a book in the larger music books. But Alec’s head is always in a book, even if there isn’t a book in front of him.

Finally, on the first day of sixth grade, the principal reads him the riot act. No more slacking. No more reading in class. Alec must now pay attention or there will be consequences. So when he realizes that he can’t read during school, Alec is under the impression that he’ll still be able to read after school during the Extended Day program.

When he finds out that he has to join an activity, Alec decides to start his own club for reading. And to make sure that few people will join (he only needs one other person to form the club), he names it “The Losers Club.” But in spite of his best (or worst) efforts, more and more kids decide that they want to read.

Clements creates a main character who is a thoughtful wonderful role model. Alec’s character is touchingly rendered especially when a former best friend has become an athlete and kind of a bully. Alec refuses to give up on him, refused to take the low road, and by the end of the book they are no longer enemies; they’re almost — but not quite — friends. More importantly, they respect each other.

Over the course of the story, readers learn about Alec’s favorite books and the favorite books of the other readers in the story, and real-life readers might seriously consider Alec’s beliefs about how reading a book can change lives. And his speech at the end about getting lost in a book is truly inspirational.

This is a book that Andrew Clements fans will love. It would be a wonderful read aloud by a classroom teacher or a parent; it’s filled with with references to other great books; and it’s also filled with vividly drawn characters and profound messages.

Don’t miss it! It certainly deserves a place on the bookshelf alongside “Frindle” and all the other Clements classics.