The story of Jason Morgan isn’t terribly unusual. He was serving in the special forces when he was badly injured in Central America. He ended up paralyzed from the waist down because of his injuries. He was despondent. Like many who serve in the military, Morgan assumed that he would always be able to do things as simple as standing and walking. When he couldn’t do that anymore, it was devastating.

Morgan became one of the injured veterans who receive a service dog courtesy of Canine Companions for Independence (CCI). And that is what makes his story special — the fact that the dog he received saved his life by giving him a reason to live. The story also includes a very important side story — that of Jim Siegfried, the person who raised Morgan’s service dog for the first 18 months of the dog’s life.

Most dogs from CCI will live with at least three different people, not including the time they spend at “boarding” school when their training is fine-tuned and they are prepared for their final destination. They start life with their mama and the person who has the breeding dog for CCI. After eight weeks, they make their way to Santa Rosa, California, where they are checked out and sent to one of the CCI centers to be given to puppy raisers. Those puppy raisers have a huge job.

Siegfried shares what the responsibilities of a puppy raiser are, and they are many. The puppy raisers are responsible for all costs associated with the puppies for the 18 months the dog is with them. They teach the dog 30 commands and take the dog to many different locations so they become used to different situations, different noise levels, and crowds. The goal is for the dogs to be calm in all kind of places, even if alarms are ringing and people are yelling.

It’s a complicated kind of dance between all the participants. After the 18 months of puppy raising, the dog is turned into the CCI for the final training. Not all the dogs make it through the training. As is explained in the book, some dogs just love to run too much or chase squirrels. Not all dogs have the temperament to be a service dog. But when one’s dog makes it through training and is matched with the person the dog will live with, it’s a rewarding experience and one that makes the process worth-while.

The book will resonate with many people. Those who love dogs and know firsthand the love and companionship that dogs bring into our lives will understand the bond that Napal and Morgan have. Those who are familiar with CCI will appreciate “their” story being told for millions to read –whether they are puppy raisers, trainers, or volunteers.

Damien Lewis, the writer who put the words to the book, does an admirable job creating dialogue that sounds authentic and making the alternating stories about Morgan and the puppy Napal with Siegfried work seamlessly together. He imbues the story with emotion and much love. In spite of the trauma that Morgan endured, the love of his family and especially the love of his dog helped him become a better person. He was there visiting Morgan for one of the most important days of his time with Napal, and it might be that being there, meeting Napal, seeing the bond between Morgan and Napal helped make the book as powerful as it is. 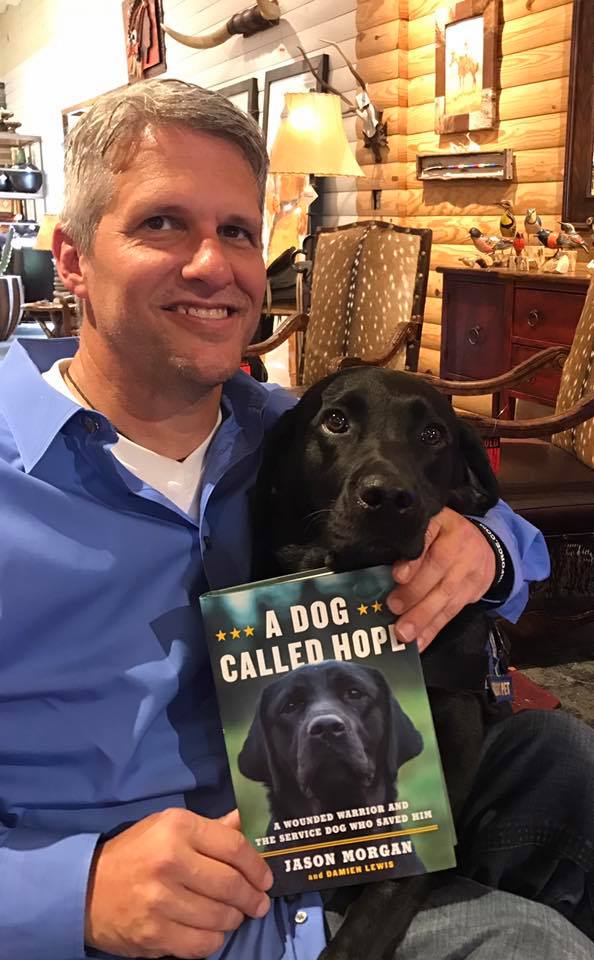 Ironically, this reviewer has a connection to Morgan through a CCI dog named Peony. Peony was raised by Beth Jerner of Texas. She brought Peony to see Jason Morgan when he was in the hospital in Texas, and one of the pictures in Peony’s puppy album is of Peony lying next to Morgan on his hospital bed. Peony went on to graduate from the Oceanside CCI facility to become a facility dog working with children.

Throughout the book is the story of Morgan’s mission to spread the word about service dogs and how much they can help veterans. That is a worthy cause. Perhaps the only failing of the book is that Damien Lewis did not attend the two-week training class when the service dogs are matched with people. Morgan’s story shares a bit of that experience, but it’s much more. Seeing what these incredible dogs do for the adults and children is an experience that no one who has been through it will ever forget. One of the people in this reviewer’s “graduating” class was a veteran who had lost both legs in Iraq. His dog, also a large black dog, was able to bring him his prosthetic leg. He was able to lean on his dog when walking up stairs to help him balance. Other vets also received dogs, as did several children with disabilities. Three of us received facility dogs. It was an unforgettable two weeks.

Thank you to Jason Morgan and Damien Lewis for articulating so beautifully what a service dog can do for people. And thank you to Jim Siegfried and Beth Jerner for being such wonderful, dedicated puppy raisers.

Thank you to Atria Books for the final, hardcover copy of this book which was provided for review purposes.