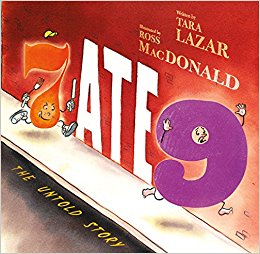 “7 Ate 9” is one clever picture book by Tara Lazar and illustrated by Ross MacDonald. I is not just a letter, he’s a Private I, and he investigates. So when 6 burst into his office because he claimed 7 was out to get him, I got to work.

To solve the mystery of the missing integer, he had to interview many letters and numbers, but he was finally, cleverly able to figure out which double-crossing digit was at the root of the problem.

This book is so imaginative and beautifully created that it would be a great choice for a wide range of readers and for a variety of reasons. It’s filled with double-entendres and puns on numbers; idioms and alliteration; mathematical terms throughout; and lots of humor. Even the title, “7 Ate 9,” is a clever play on words.

A few examples (out of the many, many, many which are in the story): “…found 6 taking forty winks,” “putting two and two together,” finding 8 “at the corner of Second Avenue and Fourth Street,” with the illustration showing 2nd and 4th in an X on the street sign.

At one point in the mystery, 8 is worried about being next in line to disappear. “In a flash, she took off her belt. Now 8 looked just like 0.” “Good disguise,” muses I. And illustrator MacDonald’s letters and numbers and the faces he adds make the characters jump out — each one distinct. B, the waitress at Café Uno, wears a red and white checkered apron with a slightly seductive smile as she dishes out ice cream on top of the banana slices shaped as pi when the detective orders a slice of pi. She, of course, had the scoop.

Young children will enjoy the story and the numbers-as-characters. Older readers will enjoy finding the not-so-easy numerical references. This teacher of gifted children even plans to use it with her 5th grade math class to see if they can parse the words to discover every reference to math and then create their own story using a similar strategy.

Please note: This review is based on the final, hardcover book provided by the publisher, Disney-Hyperion Books, for review purposes.