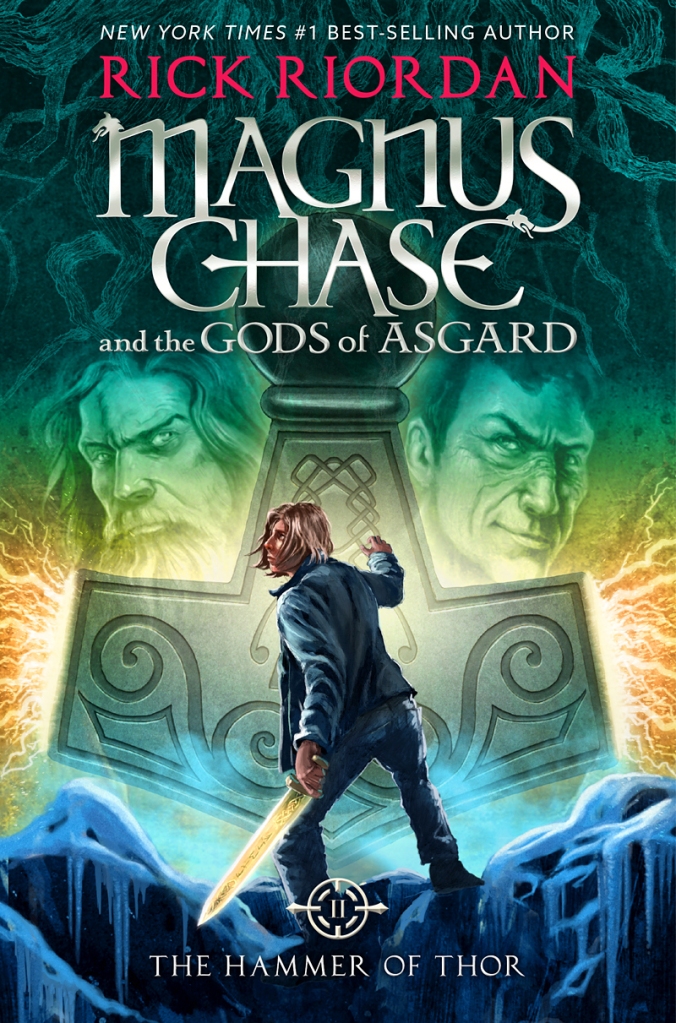 “The Hammer of Thor,” the second book in the new series, “Magnus Chase and the Gods of Asgard,” proves once again that Rick Riordan is a genius. His books are virtually addictive for kids (and many adults). His “Lightning Thief” series with Percy Jackson, for example, is still beloved by kids twelve years after its initial publication.

Magnus Chase dies at the beginning of the first book in the series and gets taken to Valhalla, where he will live forever. If he can keep saving the world, that is. Because while Magnus cannot be killed in Valhalla, if he is killed while outside of Valhalla, he is really dead again, and this time pe\

In this book, Thor’s special hammer has been misplaced or stolen, and Magnus and his buddies may be the only ones able to get it back. His friend from the first book, the Valkyrie who took him to Valhalla when he died, is Samirah al-Abbas, a Muslim girl who wears a cool green hijab over her hair and carries an ax on her belt. She’s a tough, no-nonsense girl who flies in the air. Naturally, she also wants to get her pilot’s license.

Loki, the god of evil, has been imprisoned underground, tied up with a viper dripping poison into his face while Loki’s wife holds a small bowl to try to catch the poison. Because the bowl is small, the poison still ends up burning Loki. He  can manage, however, to appear elsewhere, and he has chosen Magnus’ Uncle Randolph for his dirty work. Riordan makes Randolph a sympathetic figure, though, in spite of his assistance to Loki. Loki’s only goal is to escape from bondage and get revenge.

There is an elaborate plan cooked up by Loki to get free. It involves Samirah marrying the king of the giants, who has Thor’s hammer hidden eight miles underground. Without his hammer, Thor will not be able to stop the giants from invading Midgard (where the humans live). While trying to find the hammer, Magnus is tricked into recovering a cursed sword, which happens to be the only thing that might cut the binds that hold Loki. That scene is one of the funniest in the novel.

In an underground tomb lies Prince Gellir, prince of the Danes. He’s been dead for thousands of years along with twelve of his warriors. When he calls them to life so that they can kill Magnus and his friends, one “zombie” raises his hand. “Do we have a quorum?” he asks. And Riordan writes a scene that anyone who has ever participated in a meeting run by Robert’s Rules of Order will find extremely humorous.

Gellir explains to Magnus and his friends that they have to vote on everything. “It’s the tradition of the Thing.” He then explains that it’s from the work thingvellir, meaning field of assembly. It was the Norse voting council. That is what inspired (according to Riordan) the idea of Parliament.

So one warrior, Dagfinn, asks if he can take the minutes: “I love being secretary.” Another asks, “…is there any old business?” By the end of the scene, the warriors had moved (made a motion) to kill the intruders (Magnus and his friends), and the motion had been seconded and carried. Time for a battle.

In this second book, Riordan steps up his inclusion of diverse characters. A new character, Alex, confuses Magnus. Alex is briefly introduced as Samirah’s brother (they share the evil god Loki as a parent). But then Alex tells Magnus and his friends that the correct pronoun is “she.” In response, Magnus says to the reader in his first person narrative, “Suddenly my whole perspective had flipped inside out, like when you look at an inkblot picture and see just the black part. Then your brain inverts the image and you realize the white part makes an entirely different picture, even though nothing has changed. That was Alex Fierro, except in pink and green. A second ago, he had been very obviously a boy to me, Now she was very obviously a girl.”

The readers learn that Alex is gender fluid. Magnus struggles to understand, allowing Riordan the vehicle to explain what that means to uninformed readers. And since this book is aimed at middle grade readers, most are probably uninformed.

Alex makes sure to preface the explanation by stating that Magnus shouldn’t “…ask me to represent every gender-fluid person.” She goes on to say, “But my actual gender? I can’t control it. Most of the time, I identify as female, but sometimes I have very male days. And please don’t ask me how I  know which I am on which day.”

She then answers his question about why she doesn’t use they and them as pronouns. “Some people prefer they. They’re non-binary or mid-spectrum or whatever. If they want you to use they, then that’s what you should do. But for me, personally, I don’t want to use the same pronouns all the time, because that’s not me. I change a lot. That’s sort of the point. When I’m she, I’m she. When I’m he, I’m he. I’m not they. Get it?” Magnus doesn’t get it, but Alex is okay with that. “Just, you know, a little respect.”

And doesn’t that say it all? If young readers learn that while they don’t have to understand all those who are different from them, but just show a little respect, the future might be a brighter place.

It also seems that, not content to just create the character of Alex, the gender-fluid friend, Riordan is making it possible that Alex will be Magnus’ love interest. (In the first book there was no romantic interest.) Well done, Mr. Riordan!

Toward the end of this book, Riordan paves the way for the characters from other series, both old and new, to meet. “The Trials of Apollo” is mentioned, and Percy Jackson is specifically re-introduced. The next book, the third in the series, is sure to be eagerly anticipated.

Please note: This review is based on the final, hardcover book provided by Disney-Hyperion, the publisher, for review purposes.