Bernie is safe today no thanks to the Humane Society of Tampa Bay. This “no-kill” shelter has recently been on the receiving end of many unhappy posts on Facebook. 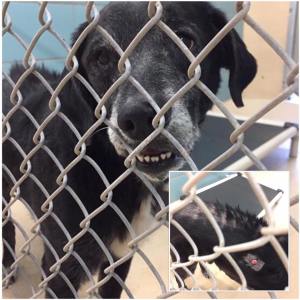 At the end of October, the Humane Society of Tampa Bay (HSTB) took in a dog from Hillsborough County Pet Resource Center. He was named Spatola. There was an adopter who had been told to wait for a medical condition to clear up before she could adopt him. When she heard that the dog she wanted had been transferred to HSTB, she immediately emailed them that she wanted to adopt him. They responded by telling her their veterinarian had already killed the dog she had fallen in love with.  The full Facebook post is linked here. See the communications below.

She sent me the following message about Spatola:

“I was in the lobby trying to see Spatola as he was probably being taken out to be transferred. It took me an hour to drive home, and I immediately emailed Tampa Bay Humane to let them know that I wanted him…so they were aware that he had a home. So frustrating and sad and these are the kind of things that kept me in the industry ….to make sure it never happened!”

On November 7, Rescue Me Tampa posted on their Facebook page the following:

This guy does not have a name so we have named him Alvin. He was found as a stray and the person tried to have him taken by the HSTB but the notes state, “animal was tested by HSTB for heartworms. The test returned back positive and therefore the HSTB would not take the dog from the source.”
Alvin’s intakes notes state he is friendly with women and is timid with men at first but warms up. He cowers from smaller dog but likes big dogs. He loves to be outside and play and lay in the dirt. He is housebroken. This guy is listed as a 2 year old Shepherd/Terrier mix. Please start sharing him.

“Alvin” was a lucky dog. After being posted on Rescue Me Tampa’s Facebook page, someone realized that he looked just like Bernie, a dog who had been at the Humane Society of Pasco County. He had been adopted. It turns out, Alvin was indeed really Bernie, and the Humane Society of Pasco County — a responsible group — wanted him back. They immediately started him on heartworm treatment and will keep him safe until he find a new and permanent home.

The Humane Society — the really humane one in Pasco County — posted on their Facebook page: Operation “Get Bernie” was a success. Our boy knew us immediately, and we are thrilled to have him back. He had his first dose of Heartworm medicine. Starting today, all dogs will be treated with Heartworm preventative. It’s a good day. 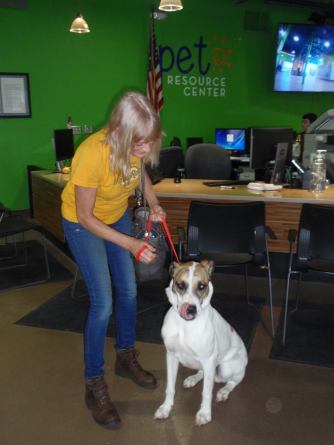 Bernie at HCPRC getting ready to leave 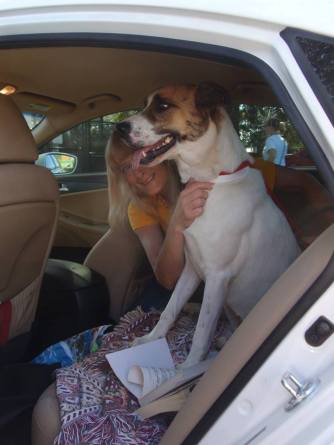 Going back to Pasco County and safety

So how does a purported “humane society” send a dog to the county shelter just because the dog is heartworm positive? For most dogs, that would be a death sentence. Few adopters can afford expensive heartworm treatment. And the Humane Society of Tampa Bay gets around seven million dollars in donations yearly — and that’s not including the money that Hillsborough County pays them to “care” for strays.

Last month, they killed a dog who had an adopter. To be fair, they didn’t know he had an adopter. But it wasn’t very fair that poor Spatola was killed almost immediately upon arrival at the “Humane” society. The big question is why they took a dog that was NOT in danger at the county shelter, only to kill him almost immediately upon arrival. That question has not been answered.

Residents of Hillsborough County also ask why the Humane Society of Tampa Bay imports thousands of dogs from other states when the local county shelter is killing dogs almost daily. Is it because cute little puppies are money-makers?  (Read “10,000 Puppies and Cats Imported to FL County Leads to Shelter Overcrowding and Euthanasia“)

Whatever the reasons, it would seem that the Humane Society of Tampa Bay has some explaining to do. Those who live in Hillsborough County deserve no less; and the animals deserve more.