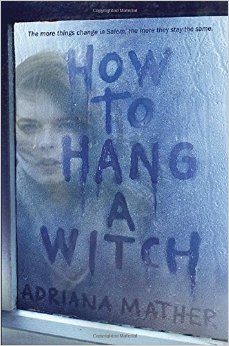 “How to Hang a Witch” by Adriana Mather is a fantasy tale of modern-day witchcraft, Salem, Massachusetts, and the effect history has on all of us. Mather feels a special connection to Salem and the witch history as she is a descendant of Cotton Mather, the infamous instigator of the witch trials. In the story, teenage Samantha Mather moves with her stepmother to Salem, to live in the house her grandmother left to Samantha’s father. Samantha has a history of not fitting in, and nothing changes at her new school.

In fact, in Salem, the name Mather is anathema. There are some creepy students called the Descendants who are, unsurprisingly, descended from the families of the original girls accused of witchcraft. But when strange things start happening in town, it is Samantha who is blamed.

There are also two young men, one a neighbor and alive, the other a ghost who lived in her house over three hundred years ago. Both try to help Samantha break the curse that has haunted the families of the descendants of the original witches and those who persecuted the witches in Salem.

The writing is extremely effective, featuring authentic-sounding dialogue and just enough detail to keep the reader enthralled. It’s an easy book to read in one sitting, not so much because of the reading level, but because the readers will want to know how it all ends. The twist, when it comes, is not entirely unexpected, but it’s still powerful.

While the suggested age for this book is twelve years and older, there is nothing that precludes younger children from reading this story. In fact, this would be an appropriate book even for fifth graders. And for those who aren’t fantasy fans, the historical fiction element of the story is itself fascinating. (Alfred A. Knopf Books for Young Readers)

One thought on “‘How to Hang a Witch’ by Adriana Mather: Young adult witchy fantasy”