Update: William/Mater was adopted! Cross fingers for a permanent home for this poor dog who has been in and out of the shelter for too long. Maybe if the shelter counseled adopters on proper introductions and how to ease a new dog into a household there wouldn’t be as many returned dogs…

Mater is a dog who is confused. He has been in and out of the Hillsborough County Pet Resource Center (shelter) since the beginning of March. At first, luck seemed to be with this handsome and goofy guy. When he got an upper respiratory infection and was going to be killed, he got a temporary foster with Melissa. She couldn’t say enough wonderful things about him, except that he was way too interested in her cats. And not interested in a good way. He wasn’t offering to share his dinner with them. He might have been thinking that he would like them for dinner. He didn’t share his exact thoughts with Melissa, but she said he shouldn’t be in a home with cats. (Note: all her cats made it through the foster unscathed.)

Dog, however, are a different story. Mater seems to love dogs of all sizes. While one note stated that Mater didn’t get along with intact neutered males, all the other shelter notes seem to indicate that he is good with all dogs. In fact, one note says he was used as a greeter dog. Watch the video of him in the play yard with another dog.

By April, Mater was urgently in need of adoption or rescue. Everyone loved him but he was getting passed over. Finally, he was fostered to adopt and he was treated for heartworm. However, two months later he was back at the shelter. The owner returned him for being aggressive with her daughter. She believe that Mater was trying to protect her, but it was unprovoked. There was no puncture or injury.

The original foster sent the shelter this note:

Obviously I do not know the adoptive family who returned him but I just wanted to drop you a note to let you know that while I had him I saw nothing but a kind loving dog.  He was around my child and all her friends. My daughter was often the one who took him out. He showed no signs of food aggression and even when giving him a bath did nothing but wag his tail.

I hope that you take the time to do a full assessment so you can see firsthand his temperament. I would hate to think that he was returned likely due to his separation anxiety (he does not like to be crated when people are home) and they lied about the reason.  He had a horrible skin condition when I first fostered him. It was very painful and when I gave him a bath even with the open sores, he spent his time giving me kisses. He loves being with his people. If you are home, he does not want to be crated and he will bark. However once you leave and he knows no one is home he stops barking as reported by my neighbor.

Mater is now “at risk” because of his return, his length of time at the shelter, and the bite. However everyone who has known him believes in him. They all have seen a sweet and loving dog.

“William rides well in the car and walks well on leash. While she has not introduced him to her dogs, he appears non-reactive. Rides great in car, walks great on leash and appears non reactive to other dogs while walking. Has the puppy behavior of wanting to tear up pillows, blankets and stuffed animals. Very food motivated, needs some work on being housebroken, kennel trained but will whine and cry if left in kennel when somebody is at home. Overall a very sweet and loving dog. Does not have a mean bone in his body.”

His sister, who he was bonded with, was killed at a kill shelter. He loved his squeaky hedgehog toy, and finally when I brought him back to the shelter he had to stay for a recheck overnight. When I came back to get him the next day, Mater was walked out with his head down.  Then he saw me and perked up, jumping on me, tail wagging. The shelter worker said, “Wow he hardly moved at all today. Look at him – how happy he is. He was literally shut down.” As stated earlier, my 13-year-old daughter was around him 24/7.  In fact she slept with him at night and she also took him out.  She loved him.

He knows sit, likes to play in water, plays fetch and enjoys tummy rubs. He is energetic and playful; he walks well on leash too! Mater has come a long way from the frightened, neglected dog that arrived at the shelter over four months ago. He is healthy, has been treated for heartworm, and is ready for a home. But unless someone steps up to adopt or foster him, Mater will be killed.

More notes from his medical foster:

He’s great with dogs, no issues at all even when they bark and growl at him he just wags his tail and wants to play. He is gentle and super sweet. He wants to be by your side. He slept right on the floor next to his foster mom. He doesn’t like the crate when someone is home, but he was a good boy in the crate during the day when his foster mom went to work. William has the softest eyes, a beautiful face. 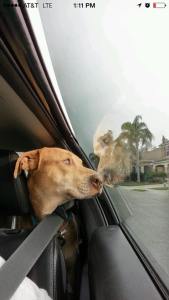 Mater looking out the window on his way back to the shelter. He had no idea he was going back to the place where he might be killed. Please share his story. He has been at the shelter too long and can be killed at any time. There may be more information on his Facebook thread.

If someone is interested in Mater, they should email rescuepets@hillsboroughcounty.org  and rescuemetampa@yahoo.com as soon as possible. In the subject line of the email, write: Do Not Euth Mater ID#A1645139. In the body of the email, include your contact information.

Please note: Only comments that are respectful and profanity-free will be published.