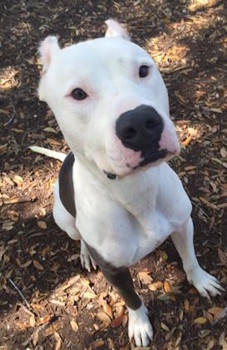 A frightened white dog was quietly killed in Tampa, Florida, at the county shelter. His name was Georgie. And he never had a chance. This is the third article about how poor Georgie never had a break in his life, and how the county shelter — Hillsborough County Pet Resource Center — totally failed him, just as they fail hundreds of other animals in this county.

Back in March of this year, Georgie was listed as “rescue only” when a volunteer decided to see what he was like. “As soon as I got to his gate he ran to see me, barking. I offered him a treat and he stopped. We took him outside where he just wanted to be pet and loved. His fur was covered in flea eggs, and his back was a brown color from all the bug bites. This was the dog they wanted to euthanize for behavior? We asked the shelter to reassess him and he passed with flying colors.”

Georgie was a sweet, friendly young dog. When Georgie was adopted shortly after that, at first the volunteers were thrilled. But then they noticed that a young 19-year-old convicted of felony violent crimes and out on probation not only adopted Georgie but another dog who could have been Georgie’s twin. They investigated a bit more and found that this young man hunts hogs. Both Georgie and Cookie, the other dog, were heartworm positive. The volunteer wrote, “hog hunting is a physical spot that involves dogs chasing down, hold, and attacking wild hogs. How could two HW+ dogs be able to do this if they were getting treatment? The simple answer is, they couldn’t and the shelter was not going to force them to be treated.” So they requested that the shelter do a welfare check on Georgie.

When the animal control officer went to the address given by the adopter when Georgie was adopted, he was told that the address was not that of the adopter. In fact, the adopter had never lived there. It was his former girlfriend’s address. The ACO was given the adopter’s actual address and saw four dogs on the property, the two adopted dogs and two dogs the adopter’s “roommate” had found, that they were planning on selling as hog hunting dogs. They did not take Georgie and Cookie away from the adopter in spite of the false information given when they were adopted. This was the shelter’s first failure to protect Georgie. (See: Convicted dog fighters can adopt dogs from county shelter with failed policies)

When Georgie was found months later as a stray, he was emaciated and covered in scars. The volunteers were shocked at his condition. He didn’t look like the same happy dog who had been at the shelter a few months before. They were heartbroken to think of what he endured during his months in a crate being forced to hunt hogs while sick. (See: Skinny, scarred stray on death row was adopted 2 months ago by hog hunting felon)

The second failure for Georgie would prove to be a fatal one. The shelter negligently allowed a three-year-old boy to play ball in a room with Georgie. The video shows the story — clearly. If you look at the upper left corner, it shows the young boy throwing a ball. Whether or not it was thrown at Georgie, it landed near him and the child ran toward the dog and put his face close to the dog’s face. Georgie bit him — not a bad bite. It didn’t require stitches, so it was more of a warning nip. But it was enough for the shelter to label Georgie a “dangerous dog,” in spite of the fact that the shelter put Georgie in a situation he never should have been in.

Anyone with an ounce of brains doesn’t allow a small child to play ball around a strange dog who was returned to the shelter after being subjected to possible abuse, a dog who had not been tested around children. And to make matters worse, the shelter lied about how the bite happened.

The volunteer wrote to the shelter director, Scott Trebotski, and said, “What actually happened is the volunteer coordinator was irresponsible with a dog who had clearly been needing to feel defensive thanks to the terrible situation he was sent to and is not telling the story as it happened. This is what the volunteer coordinator claimed happened: “Georgie was laying in the dog bed in the volunteer office. Child came in room and when the child ran past the dog the dog jumped up knocking the child down, biting his arm and then went for his face. The dog was pulled away.” That is certainly not what we saw in the video. We saw the child was already in the room playing and he never ran past the dog – he threw the ball by the dog and then went to get it. While we aren’t saying its okay to bite, this dog was put in a situation he should never have been – who knows what he went through to come back looking as he did. He was repeatedly failed.” The letter is shared on Rescue Me Tampa Shelter Dogs’ Facebook page.

One rescuer commented on Facebook that she had “been inquiring about this dog for a couple weeks now and everyone kept telling me he had a rescue hold and was safe. My rescue would have had this boy pulled and into a foster already had everyone not told me that he was already safe. Now he’s dead.” A shelter volunteer posted on the Facebook thread that “My heart is so broken that I don’t even know what to say. I loved Georgie more than any other dog I’ve met at the shelter. He was such a loving ball of joy. Even this last week when he was locked up and no one could see him, he’d push his whole body against the kennel so I could pet him through the bars. I am so sorry that someone’s job was worth more than you’re life Georgie. I am so sorry someone lied about what happened to make the situation seem better.”

Anyone with a tiny bit of rescue experience knows that you allow shelter dogs time to decompress from their experiences. Georgie had been in an unstable environment for months and then was on the streets when he was found. He was probably unsettled, frightened, and confused at the shelter. In spite of that, around adults he was great. Earlier that day, according to the volunteer, “he greeted people who came in, took treats, ate food and was an all around joy to be around (and a great kisser).”

Until the shelter made a fatal mistake. The shelter killed Georgie — the third failure at the hands of those running this shelter. Fatal for Georgie. It’s believed that the adopter has been put on a list of those who are not allowed to adopt from the shelter. Too little, too late — at least for Georgie.

Please go to the article, “Convicted dog fighters can adopt dogs from county shelter with failed policies” which lists the emails for county commissioners. Demand that the shelter be held responsible for what happened to Georgie and that whoever was so lacking in judgement be fired from their position. Please demand that the shelter do a welfare check on Cookie, and that putting false information on an adoption form be grounds to confiscate the animal. Please be the voice for those who have no voice.