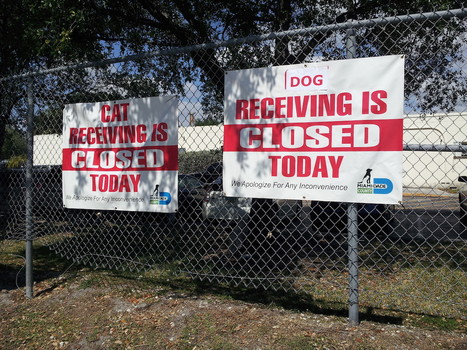 Those in charge of the Miami-Dade Animal Services (MDAS) are very proud that they have reached the 90% save rate that allows them to say they are “no-kill.” But what others are asking is: At what cost?

According to Pet’s Trust Miami, the shelter’s response to people needing to give up their animals is heartless. They basically told one caller to just let the cat outside. The shelter doesn’t take cats because there is no law against cats at large. That’s why MDAS doesn’t kill cats anymore, they just sterilize them and dump them back where they were found — to die a slow death by starvation or to be poisoned or attacked by dogs. Many dogs and cats are hit by cars. Several people called the shelter saying that they had dogs to relinquish and were told to take the dogs to Broward County, where they could pay a fee and leave them. When asked about picking up strays, a staff member told the caller that strays are at the bottom of their list, and it might take a while to get them.

“Take a while?” The people who volunteer to feed and try to rescue the hundreds of abandoned dogs in the Redlands area of Florida would disagree. It would take forever. These are individuals who go to rural areas in the southern part of Dade County to feed the dumped dogs. They try to find rescue for as many as they can — but the supply of dumped animals is never-ending. There are hundreds roaming free; some are shot, some are poisoned, some are hit by cars. All are in danger.

Recently, Marla Weech with News 13 did a story on these dogs and a rescue group from Orlando, Poodle and Pooch Rescue, that traveled to the Redlands to rescue as many dogs as they could. The rescuers were able to catch 50 dogs, but one woman alone saw 30 more dogs that she couldn’t catch. One volunteer related that she saw a woman drive to the end of a road, open the car door, push out two dogs, and drive off. The dogs chased after the car knowing they were being abandoned. One puppy the group rescued had been shot in the eye with a pellet gun; another dog had been fed food mixed with metal shards which showed up on x-rays. Puppies were found with their tails cut off, and other dogs had been badly beaten.

The stories are heartbreaking. But what is more heartbreaking is that there are hundreds of dogs who they couldn’t save who are still trying to survive there. More dogs are being dumped there every day. MDAS doesn’t care. They don’t try to help these dogs — probably because taking in hundreds of stray dogs would mean killing dogs they have, and it would ruin their “no-kill” percentages.

When a county shelter refuses to take stray dogs, owner surrender dogs, and dogs roaming free, then the residents are in trouble. When being able to say that they are “no-kill” is more important than actually helping the animals in need, that’s not a real shelter. It’s a place that caters to the egos of those in charge because they find it more important to laud their wonderful deeds than actually do the job they were hired to do.

It’s easy to be no-kill when you can just decide to not accept any more dogs or cats. If you leave them on the streets to die, then you don’t have to include their deaths in your numbers. Just on your conscience.

More information on rescue of Redlands dogs by Poodle and Pooch rescue here.

(Please note: This is a reprint of an article originally published on Examiner.com)