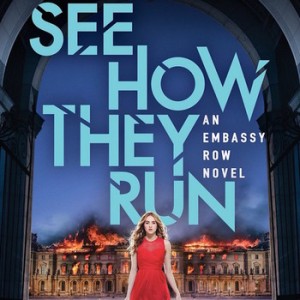 “See How They Run” is the sequel to “All Fall Down” by talented Ally Carter. The books are about an imaginary small country Adria, and the place where are the foreign embassies are located, Embassy Row. Grace Blakely is the first person narrator, and it’s established in the first book that she has emotional problems.

That may not be surprising to those who read the first book (spoiler alert) and found out that she killed her mother when she was thirteen. Now she believes there is a conspiracy, and people are acting like she is crazy. Again. So Grace must prove that she is telling the truth. Helping her (or are they?) are her friends from the American Embassy and the other embassies. Her new best friends are Noah and Alexei, who from the Russian Embassy next door.

In this book Grace’s brother Jamie returns from West Point where he is a cadet. He brings back a classmate whose grandmother was from Adria. Grace’s mother was from Adria and Grace’s grandfather is the American Ambassador to Adria. When her brother’s friend turns up murdered after a party on a nearby island and wearing her brother’s jacket, Grace decides to find out who killed him.

The story is as farfetched as they come but also well-written and totally engrossing. Life in an embassy, life in a European capital, and even just the embassy talk are fascinating. “We visited Iran last night,” means that they went to the abandoned Iranian Embassy. This book ends with a true cliffhanger, and fans of the series will be on tenterhooks waiting for the next book in the series.

This is a great choice for those who enjoy thrillers or action stories. It’s a fun and quick read. Readers should try to read the first book in the series before picking up this one — it will make much more sense that way.