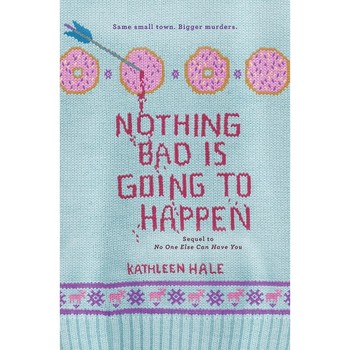 It’s not often that one comes across a murder mystery that is gruesome and yet filled with humor. “Nothing Bad Is Going to Happen” is the sequel to Kathleen Hale’s first book, “No One Else Can Have You,” which was equally gruesome and equally hilarious.

The reader is on notice from the very first page that both humor and violence are a huge part of the story. It’s a letter from Kippy’s (the intelligent and independent protagonist) former neighbor and friend, Ralph. Spoiler alert: If you have not read the first book, STOP READING NOW! Leave your computer and go purchase “No One Else Can Have You” and read it before reading “Nothing Bad Is Going to Happen.” You will be happy you did.

An example of the humor is the beginning of the book. Kippy gets a letter from her former friend, the killer from the first novel. Ralph is the one who killed her best friend in the first story. He writes: “1.) KIPPY, I’M SO SORRY FOR MURDERING YOUR BEST FRIEND. 2.) ALSO FOR DOING IT IN SUCH A VIOLENT WAY, AND WITH SEXUAL UNDERTONES. :(” He also writes that he is “sorry that when you broke into my house because you suspected me (OBVIOUSLY VALID!!!) I chased you with a machete and almost killed you! THAT WAS MY BAD!!!”

In this sequel, Kippy is still recovering (and in a wheelchair) from Ralph’s attempt to kill her when she figured out that he was the one who murdered her best friend. In this story she is still working on getting her life back to normal. She is dating her late best friend’s brother, Davey, who has emotional problems of his own. When she finds him unconscious and surrounded by pills and empty beer bottles, she knows that he was framed.

She and her new friend — a religious character that brings additional humor to the story — investigate what is going on. When there is another murder, Kippy must discover who is the perpetrator. It’s more difficult, because the person she suspects is Ralph, but he is behind bars. Who is helping Ralph extract his revenge?

The twist, when it comes, is a good one. Hale’s writing is pitch perfect and Kippy’s voice is authentic and character-driven. And there’s even a hint that there might be a third book.

Please note: This review is based on the final hardcover copy provided by the publisher, Harper Teen, for review purposes.