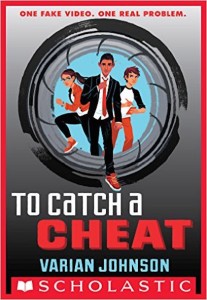 It’s all harmless mischief in “To Catch a Cheat” by Varian Johnson. It’s the sequel to “The Great Greene Heist,” and while many say that “To Catch a Cheat” is a stand-alone book, it’s a much better read after reading the first book. In fact, in the first book, the characters refer to a previous escapade which is explained in detail, but which left this reader wondering if there was another book before that one.

The characters are as diverse in terms of personality and intelligence as they are racially. But the best character is the title character Jackson Greene. He’s irreverent, brilliant, honorable, and very, very sneaky. He is a Robin Hood-type character, only creating his crooked schemes to right wrongs and foil the real bad guys. The dialogue and narrative brilliantly create characters that seem real and action that is believable.

The book is filled with humor and examples of how sometimes you have to do something wrong to make something right. It’s about friendship and family. And it’s about admitting when you are wrong when it’s the right thing to do. Most middle school students could do worse than emulate Jackson Greene.

The story is perfect for fourth graders through eighth grade. Jackson does have a girlfriend and much is made of their first kiss, so those in fifth grade through middle school will likely appreciate this story most. This is a great recommendation for reluctant readers and for those who like action stories.

It’s got a bit of everything so it will appeal to a wide range of readers: action, mystery, good and evil, friendship, humor, and a smidgeon of romance. It’s also one of the few middle grade books featuring an action hero who is African American, and although it’s barely mentioned, the entire cast of characters is very diverse. Johnson also makes sure to make all the action in the story gender-neutral. A few of the girls are better computer nerds than the guys and just as good at plotting semi-evil escapades.

Please note: This review is based on the advanced reader’s copy provided by the publisher, Scholastic Books, for review purposes.