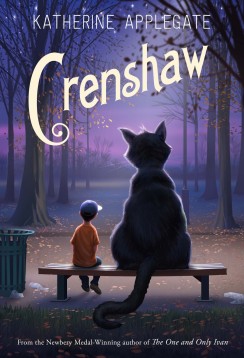 Katherine Applegate specializes in books that make the readers feel. “Crenshaw” is no exception; Jackson, the main character, lives with his parents, his sister, his dog, and sometimes, his imaginary cat Crenshaw. As the reader learns in the story, Crenshaw appears in times of need. Jackson doesn’t totally understand it, but Crenshaw teaches him what he needs to learn.

Jackson is upset because it appears that his family might be homeless again. He still hasn’t forgotten the last time they had no home. They had left the home they lived in and lived in their minivan until they got enough money to rent a small apartment. Now, because of his dad’s illness, multiple sclerosis, the father can’t work as a carpenter, and he can’t even work as a handyman. His mom has three part-time jobs because she lost her job teaching music. She works as a waitress at two restaurants and as a cashier at a drugstore.

Jackson explains in the story: “My parents used to be musicians. Starving musicians is what my mom calls it. After I was born, they stopped being musicians and became normal people.” As normal people, his parents can’t pay the rent. And what bothers Jackson even more than the insecurity is that his parents won’t tell him the truth. Jackson is wise beyond his years because of what he has lived through. His younger sister, Robin, is too young to share in his worry or understand what is happening to their family.

When Jackson asks his parents what the plan is for their future, they make jokes like planting a money tree or starting up their rock band and winning a Grammy Award. When his parents plan a yard sale with all their belongings, Jackson feels that living in the minivan again is inevitable.

The other main character in the story is Crenshaw, the human-sized imaginary cat who gives Jackson sage advice. The most important advice that he gives Jackson is to tell the truth. And it’s by sharing the truth that Jackson gets his parents to promise that they will always tell him the truth. And they do. While Jackson’s father gets a part-time job as the assistant manager at a music store, he tells Jackson that “…Life is messy. It’s complicated.” And he shows Jackson a straight line and tells him that life is not like that. He draws a line with ups and downs, and explains that life is like that. “You just have to keep trying,” he says.

Like “The One and Only Ivan,” “Crenshaw” is about how our relationship with animals — real or imaginary — can keep us sane. Although Crenshaw isn’t really a cat (he has fingers), he is Jackson’s lifeline. And there is a bit of Applegate magic in there as well. Aretha, the family dog, does see Crenshaw. And Crenshaw tells Jackson something about his father (and Crenshaw himself) that no one else knows. So are imaginary friends real, and do they all go to the imaginary friend lounge in the sky while they wait to be needed, as Crenshaw explains to Jackson? Only Applegate knows for sure — and she isn’t telling.

This book is a wonderful, touching, and captivating story. It’s perfect for children aged eight through twelve. While the text is simple enough for younger readers, the content is mature. There are few children’s book that deal with the subject of homelessness. Applegate cleverly reverses stereotypes in the story by having Jackson’s best friend, Marisol, live a more affluent life with her salesman father and pilot mother.

This is a fabulous choice for classroom use. It’s sure to become a classic, just as “The One and Only Ivan” has.

Please note: This review is based on the reviewers personal copy of Crenshaw.

LINK TO CLASSROOM QUESTIONS THAT YOU CAN USE WITH CRENSHAW. Created by Jack Kramer.