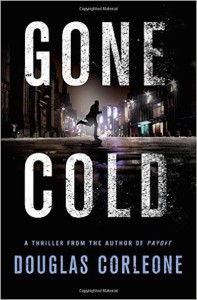 “Gone Cold” is the third Simon Fisk thriller by Douglas Corleone, but it will certainly not be the last. We know that because all these novels are too good for Corleone to stop now, and also because the ending of this one virtually screams for a next one.

Simon Fisk is a complex and compelling character. He is a brilliant investigator who has made it his life’s work to find and rescue abducted children. But the reason for that occupational choice is the real nerve center of all the books about him, and it is the driving force of this novel in particular.

Simon’s six-year-old daughter was taken from him and his wife twelve years before the action of this installment begins. Since that abduction, he has led a tortured and twisted existence. He lives his life under a cloud of despair and guilt, all of which is complicated further by the suicide of his wife shortly after their daughter’s disappearance. So this is not a happy story. But it is extraordinarily moving and totally absorbing. Corleone’s protagonist reaches out and grabs the reader by the throat and pierces the heart.

Unlike the earlier Fisk novels, his search here is for his own missing daughter, who is now eighteen years old. His friend has found a picture of a young woman who matches the projections of what his daughter would look like as an eighteen-year-old. So the search and the mysteries begin. Could this young woman — who has been accused of murder — really be his daughter? Is she a murderer? Who took her? Why? So “Gone Cold” is at least four mysteries in one. And Simon’s search educes as many thrills as you are likely to find in any example of this genre.

But it also will evoke for many readers sympathy for and identification with this deeply flawed hero’s plight — with his rage, his despair, his self-doubt, the emotional roller coaster from which he cannot escape — and his determination to find that young woman regardless of the violence and the dangers his search engenders.

“Gone Cold” is a superb mystery/thriller and a profound character study. It is, in every way, worth the time it takes to read it — which may be one very long night. (JK)

Please note: This review is based on the final, hardcover book provided by the publisher, Minotaur Books, for review purposes.