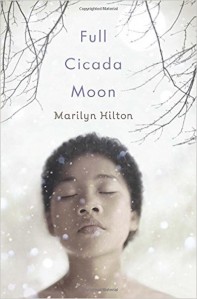 In a time when diversity is celebrated and bullying is punished, “Full Cicada Moon” by Marilyn Hilton is like a look back to to show how far we’ve come. It’s set in the year 1969, a time when civil rights was in the news and man was about to take a giant step of another kind — onto the moon.

Hilton writes the story of thirteen-year-old Mimi, the child of a black Marine veteran and his Japanese wife. Her father is a college professor and when they move to Vermont from Berkeley, California, Mimi experiences prejudice for perhaps the first time in her life. No one in the small college town is used to someone who looks like Mimi, and the reader feels the sting along with Mimi as people ask, “Where are you from?” or “What nationality are you?”

The story is told beautifully in free verse and Hilton’s writing is poetry. When her father tells Mimi about Freedom March with Dr. Martin Luther King, Jr., in Washington, D.C., Hilton writes:

“Then he tells me the air on that August day
felt thick with heat and determination
smelled like baby powder, Old Spice, and grit,
sounded like clapping and harmony, a
million footsteps on the same path
tasted like hot dogs and hope.”

Her father continues and says,
“Even now, that day reminds me
that raindrops are stronger than hammers.”

And every time that Mimi does something to stand up for herself the reader is reminded of that fact by the oft-repeated words “drip, drip, drip.” Mimi wants to take a woodshop class but is forced to take home economics instead. Instead of accepting the inevitable, Mimi works to change the system.

Hilton creates a setting and plot that are realistic and also inspiring. Mimi is a fabulous and admirable protagonist — a true hero — in her intelligence, her fervor to change injustice, her loyalty, and her compassion. There will be more than one scene that will have adults reading the book reach for the nearest tissue box. Children reading this will probably not understand all the inferences and subtleties, but will enjoy the book on a different level for the plot and outcome.

The setting becomes important in terms of when Hilton chose to set the story. While Mimi is making small steps on the road to equality, astronauts are making giant steps on the road to exploring space. Mimi wants to be an astronaut, she wants to study science, she wants to build things, and she wants to make a difference. She is the kind of character that inspires readers, and she is the kind of character that will inspire fabulous conversations about many topics ranging from race, bigotry, and equality to cultural differences, friendship and how to cause change.

This book is a great choice to promote classroom discussion and to enhance a unit of study on diversity, heroism, and change. It’s a great choice for readers between the ages of ten and fifteen. This would be a great companion book to “The Sound of Life and Everything,” which takes place in the same period and covers some of the same topics from a different point of view.

Please note: This review is based on the final, hardcover book provided by the publisher, Dial Books, for review purposes.