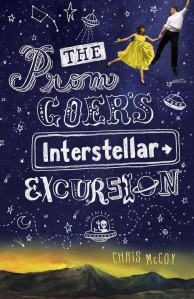 If “The Prom Goer’s Interstellar Excursion” sounds like a crazy mish-mash of a book title, then it accurately reflects the novel it names. Chris McCoy’s young adult adventure is an exciting, wonderful, and very silly combination of just about every contemporary literature genre you can think of: Lonely Boy Nerd Searches for Identity; Romance Wrecked and Regained — and Wrecked and Regained a few more times; Science-Fiction; Science-Fact; Fantasy; Alien Invasion; Horror and Monsters; Rock’n’Roll Docu-Drama; and, above all, Madcap Comedy.

Bennett Bardo is the heretofore hapless hero. Sophie is his apparently hopeless crush and the love of his life. She is kidnapped by space-monster aliens. He must follow her and save her. He, too, is (sort of) kidnapped by aliens, who will eventually help him in his quest. His kidnappers, however, are the members of a washed-up, egomaniacal, intergalactic rock band comprised of beings from several planets. The spaceship on which he joins them is their outer-space tour bus. The band used to be a Top Ten Attraction in the entire galaxy. Their rank now is number one billion and sixteen. They used to be the closing act at every concert at which they performed. Now they open the bill for everyone else, so they play before the crowd arrives. Therefore, their audience is usually about five aliens who are ready to hate them. Their band leader and lead vocalist is a rather strange-looking monster-ish glam-rock wannabe whose best days are far behind him — about 20 billion miles behind him, as a matter of fact.

The ending answers all those questions, and it’s pleasingly mushy. So if you’re on the edge of your seat, waiting for all those critical issues to be resolved, read this book. Now. By doing so, you will quite obviously save the world from the imminent danger of a hilarious alien invasion. (JK)

Please note: This review is based on the final hardcover book provided by Knopf Books for Young Readers for review purposes.