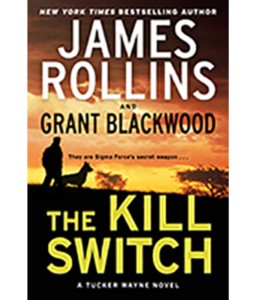 In “The Kill Switch,” James Rollins and Grant Blackwood have managed to combine two sure-fire favorites: lots of action and a brilliant, memorable dog.

It’s a fabulous idea — to create a spin-off from Rollin’s popular “Sigma Force” series and feature a strong protagonist and his even stronger dog, Kane. The story begins over a hundred years ago in Africa during the Boer War. After taking shelter in a series of caves, a troop of Boers contract a virulent disease that is killing them quickly. The reader doesn’t find out what happens — at least not yet.

The action switches to Russia in the cold of winter. Tucker, the protagonist, is on assignment to save the life of an extremely wealthy Russian businessman. During this –rather superfluous — action, the reader learns about Tucker and Kane, his Belgian Malinois and a working military dog, and their history. It’s the reader’s first introduction to the dual narrative — Tucker’s story and the action through Kane’s eyes as related in italics.

Then Tucker is asked to accompany a defecting scientist out of Russia. It all seems simple, but if it were simple, there wouldn’t be a story. There is a cold-blooded, beautiful assassin, lots of Russian military, and local Russians who help Tucker and Kane.

From the cold of Russia to the heat of Africa and back to cold at the end, Tucker and Kane must save the world. Tucker uses his intelligence, experience and Kane. Kane just relies on his instincts and superb training. They seem to be an unbeatable team.

At the end, Rollins discusses military dogs and their handlers. He mentions Chaser, the dog from the book “Chaser: Unlocking the Genius of the Dog Who Knows a Thousand Words.” Rollins correctly states that it’s not unbelievable that a dog could have the vocabulary of Kane, the super-hero dog in the story. And it’s true that dogs and their people bond and communicate. Just read “The Genius of Dogs” by Brain Hare. As amazing as Kane seems in the story, the information about dogs in Hare’s (non-fiction) book is amazing, too.

Love dogs? Love action and adventure books? Love it when the good guy wins? Don’t miss “The Kill Switch.” It’s all that and more. And, as Rollins states at the very end of the book, “Finally, let me leave you with one last fact: Tucker and Kane will be back — because their true adventure is just beginning!”

Please note: This review is based on the final hardcover book provided by the publisher, William Morrow, for review purposes.