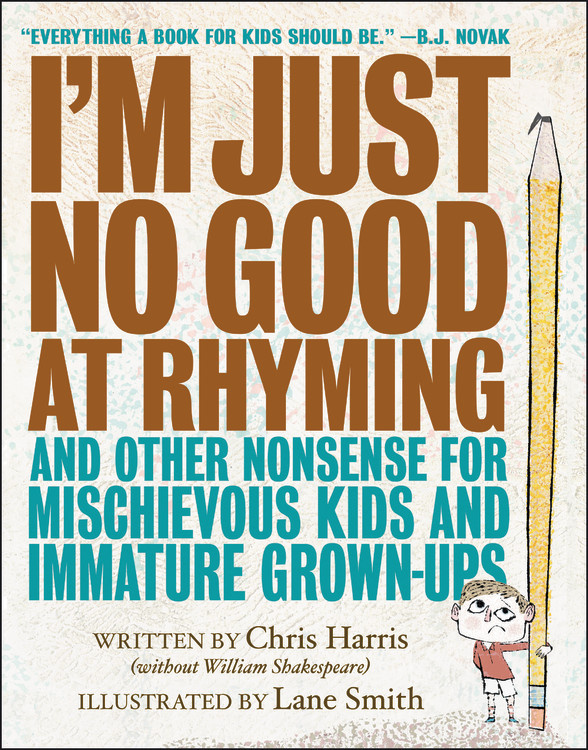 There’s a new poet in town, and he’s going to give Jack Prelutsky a run for his money. Chris Harris’s “I’m Just No Good at Rhyming and Other Nonsense for Mischievous Kids and Immature Grown-Ups” is filled with many poems and other miscellaneous nonsense (like a “How-are-these-two-pictures-different?” puzzle where — spoiler alert! — both pictures are the same!).

The poems are all filled with humor and are deftly illustrated by Lane Smith. Two pages are filled with the beginnings of poems and a running commentary by Smith about how the poems are too ridiculous and would Harris please try writing a different poem instead. After four no-gos, Smith suggests that Harris write a poem about a monster under the bed, which Harris writes, and which is fabulous (and illustrated).

One poem is quite touching. “The World’s Best Offer” is a sweet poem about a child being held in his father’s arms. The World calls to the child to come and explore and see. But the child wisely decides that the World can wait. Right now, being in Dad’s arms is world enough.

“Two Roads” pays homage to Robert Frost in a unique way, and one doesn’t notice the strange numbering of the pages (even though it’s mentioned at the beginning of the book) until the poem “Eight” about Leo Arden, whose parents neglected to teach him the number eight.

There are poems to read to children, and there are poems that children will want to read to themselves. The illustrations are simple, and the only color besides black and gray is a sepia-beige. In fact, one poem is titled “I Don’t Like My Illustrator” and it begins,

“I must confess that I don’t like my poems’ illustrator.
They told me, “Lane is great!” but man, I really think I hate her!
I swear that I drew better when I was a second-grader!
You won’t believe my endless list of reasons to berate her!”

For revenge, Smith draws a portrait of Harris on the next page with the comment, “Also, for the record, I’m a he not a she!”

Children’s poems are always wonderful to have at bedtime, and it’s important to get kids interested in poetry at an early age. The best way to do that is by exposing them to accessible and humorous poetry — just like the poems that fill this book.

Please note: This review is based on the final, hardcover book provided by Little, Brown and Company Books for Young Readers, the publisher, for review purposes.

Leave a Reply to Rise A. Cancel reply