When you walk into the lobby of the Hillsborough County Pet Resource Center, it all looks beautiful. The lobby is cool, especially on a 95 degree summer day in Florida. There is fresh paint on the walls, flat-screen televisions on the walls, computers for people to look for pets, even one kennel adjacent to the lobby where dogs are housed in air conditioned comfort.

However, while the dogs in the air conditioned new wing appear to be much more comfortable in their cool kennels, volunteers pointed out that there is no outdoor access for these dogs. When the renovation was done, no one thought to make sure that all dogs would have outside access to relieve themselves. The space was there — there were just other priorities. The dogs’ comfort and ability to defecate away from their living area was not important.

So while the dogs in the back kennels where there is no cooling can relieve themselves outside and sit inside in a clean kennel, the dogs in the smaller, cooler kennels must defecate and urinate in the same area where they sleep and eat. It’s a tough call which dog has it better. 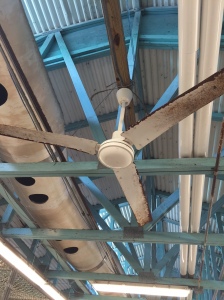 Not only are the kennels in the back not cooled, they don’t even have adequate air circulation. Most shelters that care about the comfort of its animals have multiple large industrial fans moving the air so all dogs feel a breeze. When the temperature remains in the 90s and there is high humidity, ventilation is vital for the comfort of the animals.

In the Hillsborough shelter, there is one large fan in each kennel that moves the air for the dogs in the kennels closest to the fans but does not reach even halfway down the row. There are a few ceiling fans that are similar to what one might have in a bedroom. They move a small amount of air in the aisle between the kennels, but not in the kennels where the dogs are. And some of those fans are broken. Many thousands of dollars were spent on the front of the shelter, but nothing for the dogs in the back. In fact, while leaving the shelter, I walked through a door in the main lobby with two older gentlemen. I commented to them, “Pretty nice up here, isn’t it?” Their response was the very perceptive comment, “They need more of this (air conditioning…) back there (where the dogs are). Two men visiting the shelter to see what was new were able to spot that disparity in a short visit. 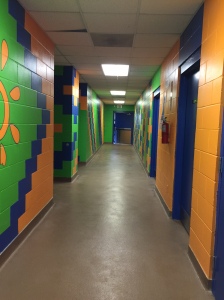 A huge problem and obstacle to saving the dogs of this county is the fact that the shelter changed their software on May 1. While the volunteers at Rescue Me Tampa — a group instrumental in saving hundreds of dogs through their Facebook page with over 30,000 loyal volunteers — used to be able to access information about the shelter dogs through a volunteer login, that’s no longer the case. The group was promised that access would be restored, but that has not happened. They are frustrated because during meetings with the shelter director, he says that they are still going to have access or get the same information they used to get, but then nothing happens. He doesn’t respond to their emails. He doesn’t seem to care that the group can’t help the dogs find rescue or adoption without that information. And dogs are dying.

It’s a shame this shelter that worked closely with the volunteers for years — thus saving a huge number of dogs — is now determined to block the volunteers in many ways from helping the dogs. In fact, during my visit to the shelter, I asked the customer service supervisor why young kittens weren’t housed together. Many rescues and shelters have kitten rooms where the youngsters can play and interact with each other. This helps socialize the kittens and makes them more adoptable. His response was about the spread of contagious disease. I pointed out that if there was a very contagious disease in one kitten, the surrounding kittens would get sick even if they were in the cage next door. He had no reply. There was at least one very young kitten housed alone and meowing pitifully. No one was playing with them.

I asked Christine, the volunteer coordinator, why she allowed a dog newly returned to the shelter from an abusive situation (starved and covered in scars) to be in her office with a three-year-old child. The three year old threw a ball near the dog and ran toward it when the dog jumped up and bit the child. The dog was immediately killed — but volunteers who knew the dog insist that this dog was sweet and gentle. (See Volunteers heartbroken; dog failed by shelter three times was killed) They say that he should never have been put in this unsafe situation. Then they claim that the employee lied about what happened. When video showed the truth about what happened, the employee who lied was not reprimanded or fired.

Both this employee and the customer service supervisor were unfriendly and unhelpful. In fact, during this uncomfortably hot afternoon with volunteers all over the shelter taking pictures of dogs and helping people find pets, not once did I see the volunteer coordinator thanking the volunteers for coming in or offer them cold water to keep from dehydrating. In fact, one volunteer told me that it’s been three years since the shelter has had any event for volunteers to get together and talk.

It was recently reported by Steve Andrews of News Channel 8 On Your Side that the Pet Resource Center doesn’t even keep track of which rabies certificates were issued to which dog. That’s one of the most basic responsibilities of a county animal control. And they aren’t doing it. In the news clip, one person says to the county board during a meeting lauding the director Scott Treboski’s management, “I’m here today to make sure that all county commissioners are aware the county is in violation of state law.”

On the Saturday afternoon of my visit, there were few volunteers at the shelter. There weren’t an army of green-shirted volunteers taking the dogs for walks, showing them to prospective adopters, socializing them. No volunteer greeted me when I walked in. It’s hard to see what the volunteer coordinator does — in fact, during this afternoon, she was not in the kennels at all or interacting with the volunteers.

This shelter has a long way to go before the director should be getting any awards from anyone. I’m sure Mr. Trebatoski has air conditioning in his home and car, and in his new fancy office. The animals in the back are suffering. Their needs came last when spending the county’s dollars renovating the shelter. That’s a shame.

12 thoughts on “Hillsborough County Pet Resource Center spends money on the lobby, but dogs still sweltering in the back”